Man, I can absolutely relate to Murray from The Goldbergs. Motherfucking Spring Break is here, which means it’s time to pop off them jeans! Slip into something more comfortable, and fucking flat-out vibe. It’s goddamn glorious out today on the Eastern seaboard of the Empire. I got myself a warm-ass breeze wafting into my study, I got a warm-ass can of Diet Dew flying down my gullet, and I got a warm-ass glow in my heart.

Between the weather, the longer days, and the imminent approach of our vaccinations, I’m feeling hope. Really, I’m feeling hopeful for the first time since maybe the Fall. The Winter cracked open my psyche and blasted my mind-ass. Somehow while missing my prostate, because let’s be honest: an ass-blasting focusing on the prostate is a glorious, near-heavenly experience.

END_OF_DOCUMENT_TOKEN_TO_BE_REPLACED

March 5. It’s officially been one year. One year since I went to my last movie, one year since I went to a fitness class, more than one year since I’ve seen a cadre of my friends. I’m trying not to hyper-fixate on all I’ve lost in these Fallen Times, especially since I’ve gotten off relatively light. You know? Like, on one hand, it’s only a year of my life. But on the other hand, it’s an entire year of parties, trips to the movies, and watching sports with friends. Considering that nothing’s promised in life, particularly your persistent existence, it’s a bit of a heavy bummer.

Blessedly, the vaccine gets closer and closer to my arm, even as my anxiety has me spiraling further and further from a comfortable existence. The dichotomy between the intellectual realization that the End of coming, and really the fractures in my battered psyche deepening is really a case study waiting to happen. S

That said, what can you do, you know? Just persist. Find joy in the small things. Eat pizza, watch horror movies, look forward to the seemingly-receding but literally-approaching day when I’ll be vaccinated and sitting in a restaurant with sSam. Or in Rendar’s backyard for a BBQ with shared comrades. It’s the only choice, and when you evaluate it, it seems a solid one.

Anyways, so that’s where I’m at emotionally. Why not keep your maudlin Captain company this weekend? Here, at the Open Bar! Physically distant, but emotionally resonant hanging!

What are you up to this weekend, friends? Let’s spend some ttime.

Motherfuckers it’s the weekend, and that can only mean one thing. Fucking time to pop off our pants, turn off our motherfucking Ring Lights (if you’re a remote teacher like me), and get high as hell! You know, relax! Put on a good horror flick, stretch your gullet beyond reasonable measurement, and fucking gorge!

Seriously though, you sublime bitches. Let’s gather! It’s time, my fellow Degenerates of the Round Table! The Bar is Open, my mood is good thanks to sunshine and a 48-siesta, and my heart throbs for you! Yes, for you!

END_OF_DOCUMENT_TOKEN_TO_BE_REPLACED

Oh lord, friends! It is the mother-fuck-ing weekend, and not a moment too soon! A stressful week has given way to a temporary haven. Some 48-hours or so where I can shut down my brain, open up my gullet, and eat junk food and watch slop. How the hell are you folks doing? It’s a goddamn mess across the map, with most of the Empire getting ass-blasted by cold weather and snow.

END_OF_DOCUMENT_TOKEN_TO_BE_REPLACED

Is it Spring yet? ‘Cause I have visions of it, my dudes. My mind wanders as I drive down the roads, the frozen-ass tundra greeting me. Is this truly the same planet that I mountain biked on, like four months ago? It is, but my does it boggle my rotted-ass synapses. What an odd world, what an odd life, what an odd time. Yet, with each passing day, those motherfucking trails get closer. Day by day, minute by minute, the glorious summer dusk bike rides are closer to their return.

END_OF_DOCUMENT_TOKEN_TO_BE_REPLACED

Weekend Open Bar: The Saints Can’t Save You 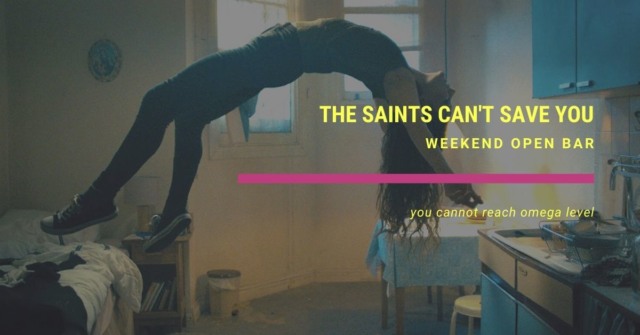 The Saints can’t save you, motherfuckers! Nor can the Trees, or the Ones Who Walk Behind The Shadows. However, you can absolutely save your fucking self. It’s within you, it’s within your guts, it’s within your marrow. Is it easy? Nah! Is it guaranteed? Nah! But, it’s a promise at the end of a dank tunnel. What does salvation look like, for me? Acknowledging that I have control over my circumstances. Self-care. And! Hanging out with you fuckers! Hey, look at that. A poorly-stuck segue into this here fucking column! However, I ain’t completely full of shit.

Salvation comes in the form of community, the creation of bonds, the spending of our entropic-distillation together. Shiny baubles and distractions are fantastic, but just fucking broing out with you legion of degenerates is more enjoyable than anything else.

So come hither, you fellow slime. Let’s spend the weekend together at the Open Bar!

END_OF_DOCUMENT_TOKEN_TO_BE_REPLACED 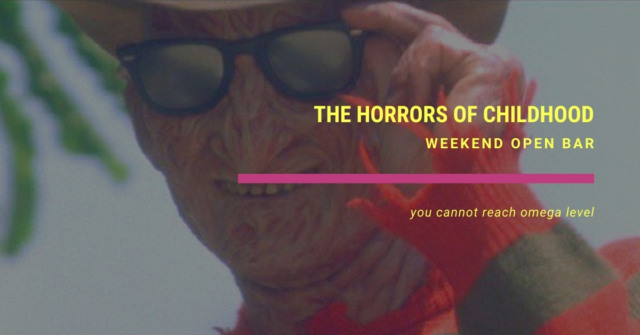 Guilty of nostalgia, motherfuckers! Of the honeying of childhood, the discarding of its various horrors, and the embracing of its warm glow. Listen, if you watch the stream you know that my childhood was wonderfully replete with woes. At the same time, it was also a time of magic. Nothing quite rocks one’s ass like a childhood discovery. Be it a horror film that sculpted your brain, a video game that changed your life, or a metal album that had you throwing up the metal horns. Fucking A, bro! Sure, you grow, and continue to find things you love. Hopefully! Hopefully.

I suppose I should acknowledge that many people find themselves despondent in their aging corpus, and retreat into the bosom of nostalgia. They suckle upon the curdling milk of Mother Wayback’s teats. That ain’t healthy, and I do pride myself on continuing to find joy and wonder in new experiences, even as I approach Middle Age. That said, there’s a joy to rekindling old memories with friends, such as you fucks, here at the Weekend Open Bar and on the streams.

END_OF_DOCUMENT_TOKEN_TO_BE_REPLACED 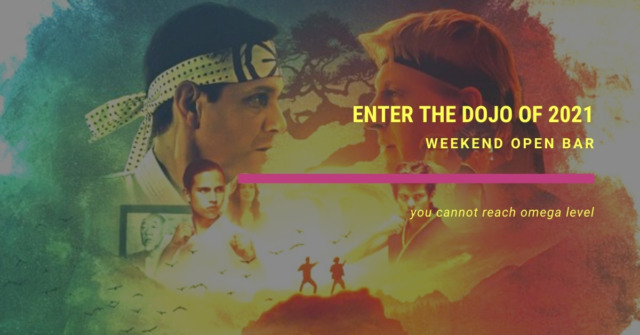 By god, we fucking made it! 2021, motherfuckers! The new year has arrived not a moment too soon, and I’m glad to karate chop the neck of the previous 365 days. I know there’s the fair critique that time is arbitrary, a new calendar don’t mean shit, and nothing magically changes. That said, it still counts for something. Our little human meat-computers process reality through the experiencing of touchstone moments. Holidays, birthdays, and word, the new year. Don’t blame me, I’m just the messenger. Science shows that shit.

Which means while the calendar flipping may not change anything, the start of the new year is a solid-as-fuck totem we can cling onto as we eye happier days in the upcoming months. So, fuck yeah, arbitrary or not, I’m stoked to finally be rid of the previous shit-ass year.

END_OF_DOCUMENT_TOKEN_TO_BE_REPLACED 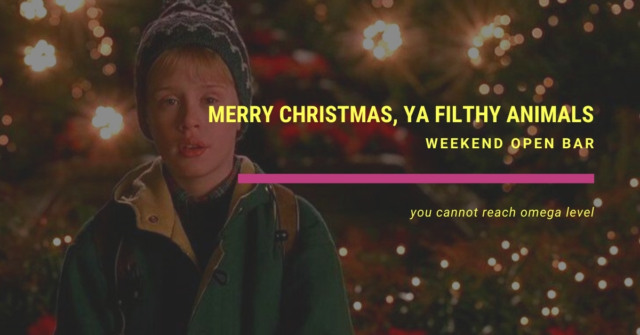 To each and every one of you motherfuckers. Man, what a fucking year it’s been. I mean, unconventional to say the least. No? Unconventional! To say the fucking least. In a year of unconventional existence, why would the holidays be any different? They wouldn’t! Which is why this Christmas Eve has been a quiet, muted affair for me. Christmas will follow too in a similar manner, obviously.

END_OF_DOCUMENT_TOKEN_TO_BE_REPLACED

Weekend Open Bar: The Sound of the Queen’s Gambit 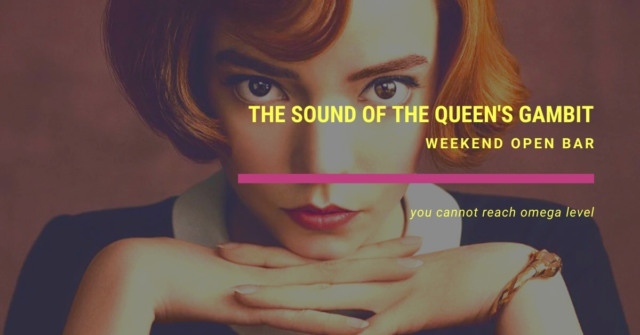 Oh holy fucking moly, it’s the end of a deeply exhausting week! Glad that Sam’s surgery is behind us, compelled to pray that her results back clean, and refreshed from my first decent night’s sleep last night. So man, I’m fucking stoked. To being able to relax for the next couple of days, prior to tackling the last week of the semester.

But, enough about my stinking, rotting ass!

How the fuck are you all dong, my friends? This is Weekend Open Bar, and I implore you to hang out with me! Keep me company during this first weekend of December, an odd December no doubt.