NASA has captured the sound of a black hole and its fucking haunting. I dig it. 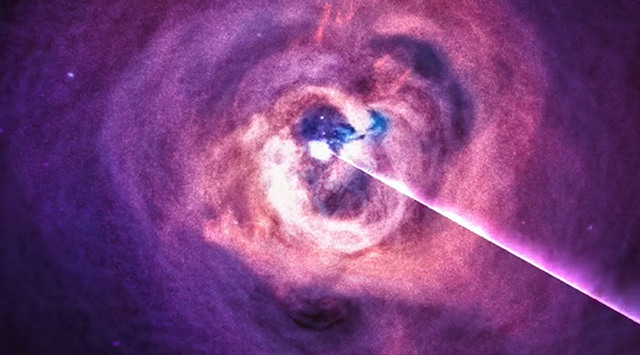 In space, no one can hear you scream, the saying goes, because sound waves can’t travel through the vacuum that extends across most of the universe. However, space can be downright noisy in the right conditions, such as the hot gas surrounding the immense black hole at the center of the Perseus galaxy cluster, according to NASA.

The agency recently tweeted an eerie audio clip that represents actual sound waves rippling through the gas and plasma in this cluster, which is 250 million light years from Earth. “The misconception that there is no sound in space originates because most space is a ~vacuum, providing no way for sound waves to travel,” the agency tweeted. “A galaxy cluster has so much gas that we’ve picked up actual sound. Here it’s amplified, and mixed with other data, to hear a black hole!”

Though the acoustic signals generated by the black hole were first identified in 2003 in data from NASA’s Chandra X-ray Observatory, they have never been brought into the hearing range of the human ear—until now.

“In some ways, this sonification is unlike any other done before… because it revisits the actual sound waves discovered in data from NASA’s Chandra X-ray Observatory,” NASA said in a statement. “In this new sonification of Perseus, the sound waves astronomers previously identified were extracted and made audible for the first time.”

As it turns out, the sound waves in their natural environment are a whopping 57 octaves below the note middle C, making this black hole a real cosmic baritone. To make these tremors audible to humans, scientists raised their frequencies quadrillions of times (one quadrillion is a million billions, for perspective).

The effect is so chilling that it would seem totally at home in a Halloween playlist. But it is just one of many trippy earworms from the space sonification genre, in which astronomical data of all kinds is converted into sound waves. To that end, if you’re looking for some more off-Earth bops, check out these real recordings from Mars, the songs of gravitational waves, and the resonances of planetary systems.