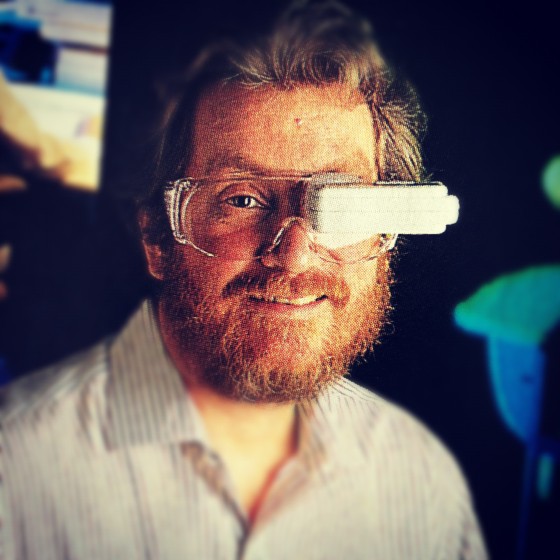 Transcender knew he was in for a world of shit.

He’d woken up from his Post-Lunar nap a bit early. Which wasn’t unusual. But rather than waiting for Larissa – the lab assistant with the big smile and bigger bust – to help him out of his pod, he crawled out on his own. Everyone on the Station knew that rule number one is that Transcender was never to be left to his own devices.

Especially after a nap.

Running a hand through his beard, Transcender gazed out the bay window and laughed to himself. “Sweet Man-Jesus, where’ve they sent me now? Is that Saturn? Oh, if Rodrigo could see this, he’d prolapse for sure!”

Had he studied the mission plans as thoroughly as he told Doc he would, Transcender would’ve known that they were far, far past Saturn.

Transcender Yonder’s attention was fully directed out the window, on the satellites and comets he’d soon be smashing to pieces, when a breeze of bitter wonder wafted into his nose. He immediately spun around, balancing best he could while his muscles readjusted to the artificial gravity, and began searching for the source of the smell. Other than his pod, all that was in the room was sterility – medical instruments, monitors, a vacuum.

And, much to Transcender’s delight, a coffee pot.

Fast as he could, the Meta-Man approached the coffee pot, threw back its lid, and poured the contents into unhinged gullet. Having never tasted coffee before, Transcender basked in the wonder of simply experiencing something new. Coffee! Aha! So this is what they drink when they wake up! A fine concoction! Chemically stimulating and socially facilitating!

But then Transcender’s hyper-sensitive neurons kicked into gear.

Larissa walked into the room just in time to see the six-foot-six ubermensch fall to his knees. He clutched at his left eye and screamed, “I have the pressure of a dying star within my skull! Sweet-mammaried  Larissa, save me! I beg of you!”

Without hesitation, Larissa picked up the phone on the wall and dialed zero. “Doc? Yeah, it’s me. Looks like he got into the coffee. Yeah, Transcender’s having his first headache.”

Already knowing the answer, Transcender Yonder looked up and asked sheepishly, “Am I in trouble?”

This is the Monday Morning Commute. I’m going to run through the things I’ll be doing to entertain myself during the week. Then, you hit up the comments section and do the same. Hell, ain’t this the whole damn point of the Internet?

END_OF_DOCUMENT_TOKEN_TO_BE_REPLACED 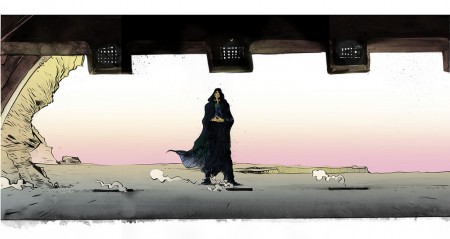 I hadn’t come across this riffage of Luke Skywalker by Paul Pope for  Star Wars Art: Comics, despite the fact that I’m pretty sure Rendar owns the book. Oh well! Better later than never. God bless The Pope, and that intersection between talented artist and childhood staples. 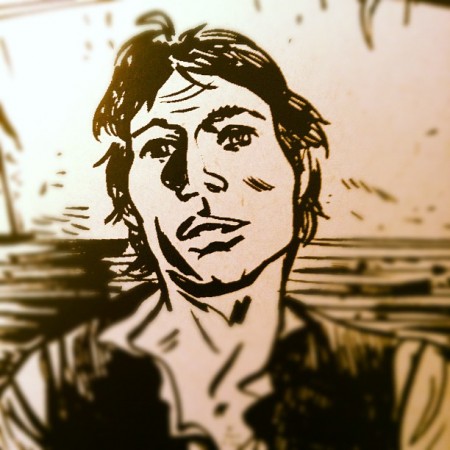 Voodoo-prescribin’ witch doctors once invited me to a party.

It was the summer of 1987 and I was in the middle of one of the worst hangovers of my entire life. Since April, I’d spent every waking hour thrashing to Among the Living and doing lines of gasoline-soaked blow. As far as I can recall, it wasn’t until mid-July that I even realized I’d made it all the way to Nova Scotia.

Don’t let anyone tell you that heavy metal and drugs won’t lead you anywhere. They will. Specifically, to the beautiful port-town of Yarmouth.

Anyways, I stumbled out of buck-toothed Ambellina’s bedroom, leaving behind my Walkman and cocaine in the hopes of finding something slightly more transcendent. Fortunately, I found the Tim Hortons whose manager seemed eager to keep my coffee cup filled to the brim, free of charge. (In hindsight, I think must’ve let him look at my Polaroid collection. You ever see a Yeti’s genitals? No? Well, then you haven’t seen my Polaroid collection.) After my thirteenth cup of black wonder, I saw them.

There were three of `em. They were all black dudes. They were all wearing sleeveless Wham! t-shirts tucked into blue jeans, which were in turn tucked into work boots. And their accents couldn’t’ve been more diverse. The fat one spoke with a Cajun twang, the old one spoke through a metrosexual French patois, and the tall one sounded German.

In a flash, they’d all taken the liberty of joining me in my booth. Surrounded on all sides, strung out, and shaking in an over-caffeinated stupor, I had no hope of escaping `em. Which wasn’t really a concern of mine until the old one pulled a decapitated chicken out of his backpack and started rubbing it on my face. “Ah, mon ami, you need to stop stressing out!”

“Ja! Too stressed” shouted the tall one, loud enough to turn the heads of patrons.

I was vexed, absolutely sure that these three were going to murder me. I finished my coffee, the best last meal I could ever hope for, and prepared for my demise. “So, you’re goin’ to kill me, huh?”

The old man put the chicken back into his bag and did me the favor of wiping the grease and blood from my face. Granted, he cleaned my visage with his bare hand and then proceeded to clean his hand with his tongue, but the sentiment was there. He then did his best to reassure me.

“Eh bien! Murder is for poets! We are witch doctors! And we’ve got a prescription for you!”

Toothy grins spread across the trio of shadowy faces. And then, seemingly from out of nowhere, four of the ugliest, skankiest Canadian girls I’d ever seen appeared behind the witch doctors. If I had to bet, I’d’ve put my money on at least two of `em havin’ VD.

Welcome to the Monday Morning Commute! This is the feature in which I write whatever nonsense pops into my mind and then run through the various ways I’ll be entertaining myself into the weekend. At that point, it’s your duty/honor/begrudging privilege to hit up the comments section and share your own ennui-destroyin’ elixirs.

END_OF_DOCUMENT_TOKEN_TO_BE_REPLACED 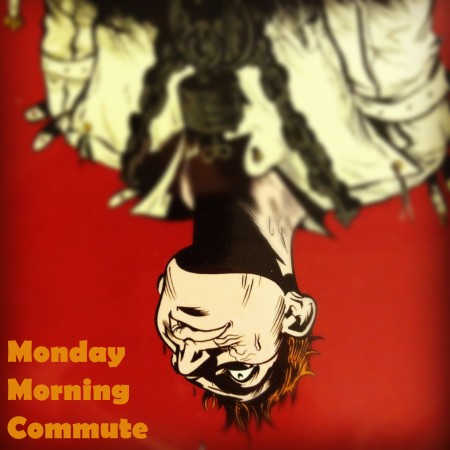 In 1992 Dave Mustaine welcomed us to tomorrow. To be fair, this presentiment was most likely the product of combining hours of guitar-slingin’ with label deadlines and, of course, heroin. But the man wasn’t wrong. By the end of the 1990s, the world would be altered irrevocably, requiring us to adapt or perish.

Again, Uncle Davey had tried to warn us.

Look around. Grandpa’s got a Bluetooth in his head, the teens use Twitter to goad one another into suicide, and SkyNet has invented a self-driving car in the hopes of obliterating human agency. So how do we survive the hustle in bustle of the post-cybernetic revolution?

We talk about the shit that makes us happy! Welcome to the Monday Morning Commute! This is the spot where I show you how I’ll be entertaining myself into the weekend. Your task is to hit up the comments section and share the wares you’ll be using. It’s really just show-and-tell with typing, but aren’t we all pretty much children these days anyways.

END_OF_DOCUMENT_TOKEN_TO_BE_REPLACED

In my younger and more volatile years, I tried really hard to be smart. I read intelligent stuff, used big words, and analyzed movies more than I watched them. Hey, we all make mistakes. Anyways, per the requirements of a media theory class, I once found myself reading Scott Bukatman’s Terminal Penetration. At the time, I was simply enthralled by Bukatman’s examination of the postmodern relationship between technology, consciousness, narrative, and virtual reality.

This theorist’s words spoke to me, encouraging me to scrutinize reality and the ways I experience it. However, the class ended, so I went back to drinking beers and playing MarioKart: Double Dash!! instead of worrying about the inevitable collapsing of reality as its paper-thin foundation crumbles.

However, I have now learned that Paul Pope has contributed art for the 2nd edition of Scott Bukatman’s Blade Runner reader. As a diehard acolyte of the PULPHOPE, a fan of Harrison Ford’s most under-appreciated work, and a one-time student of media theory, I may just have to snag this book.

Punch it to hyperspace to see art, clips of the movie, and a video of Bukatman analyzing superheroes.

END_OF_DOCUMENT_TOKEN_TO_BE_REPLACED 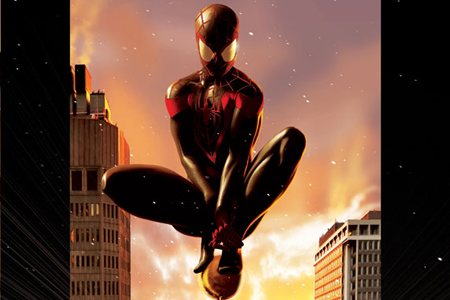 The name is the game! Welcome to Comics We’re Buying This Week, the communal comic book welcome wagon where we all share the hotness we’re snagging from the funny book farm on a given Wednesday. Per usual: my taste is shite, and I’m always looking to broaden my horizons. Don’t know what’s dropping? Behold ComicList.

END_OF_DOCUMENT_TOKEN_TO_BE_REPLACED 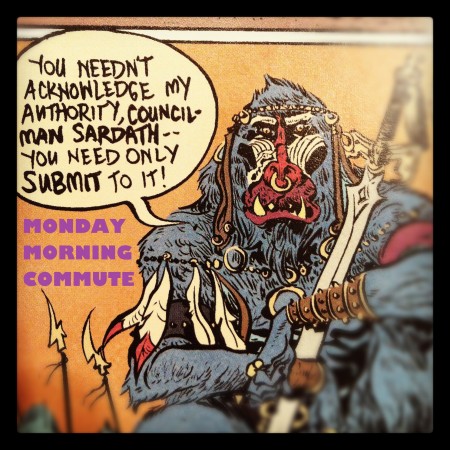 For those of us in the United States, today is Presidents Day. If I’m not mistaken, the holiday came about by merging the observances of Washington’s Birthday and Lincoln’s Birthday, and then including every other dude to ever serve as commander-in-chief. Personally, I think that this inclusivity is a bunch of malarkey. I mean, Washington was pretty dope for setting the presidential precedents, so I get wanting to celebrate his life. And Lincoln? Hell, the dude freed the slaves and preserved the Union! Who doesn’t want to give Honest Abe a high-five?

So while there’ve definitely been a few president-studs, they’ve most certainly been outnumbered by the duds. As I sit around today, watching television and reading books and not doing an ounce of work, I’m going to pick and choose the presidents to whom I give thanks. It only seems right.

Without further adieu, welcome to the MONDAY MORNING COMMUTE! This is the spot where I ramble about some rubbish, and then show you the various ways I’ll be entertaining myself over the course of the week. Your task is to hit up the comments section and show off your own strategies for surviving the workweek.

END_OF_DOCUMENT_TOKEN_TO_BE_REPLACED 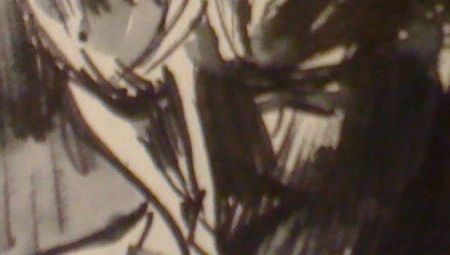 Quick, name a movie I love!
What’s that you say, Blade Runner? Fantastic!

Okay, now name one of my favorite comics artists!
Paul Pope?! Yeah, he is one of my panel-producin’ heroes!

Now hit the jump to see what happens when the ever-mighty Pulphope tries his hand at sketching a couple of the most iconic scenes from Blade Runner!

END_OF_DOCUMENT_TOKEN_TO_BE_REPLACED

Ahoy! How goes it, bros and babes of the OL Nation? It’s been awhile since I’ve danced aboard this burning ship of nerd-revelry, as I’ve needed some time off to lick the wounds inflicted during my stint as the OCTOBERFEAST emcee. But alas, I’ve returned to the command center, eager to help Caffeine Powered steer this conflagration-barge right into the hearts of the willing.

Whether its pounding in your chest or blackened by loss or fluttering amorously, we want you to open your hearts to the Omega Level. So come on, don’t just stand there! Hop aboard! ALL HANDS ON DECK!

This here’s the MONDAY MORNING COMMUTE, the weekly salvation-via-distraction show and tell feature. The fact of the matter is that the workweek sucks – we kill ourselves at jobs that date rape our spirits and then can’t even be bothered to   drive `em home in the morning.

To thwart forty-hours’ worth of ruin, we’ll take turns showcasing the bits of entertainment we use to ensure our souls’ chastity. I’ll go first, then ya’ll can hit up the comments sections and follow suit.

END_OF_DOCUMENT_TOKEN_TO_BE_REPLACED 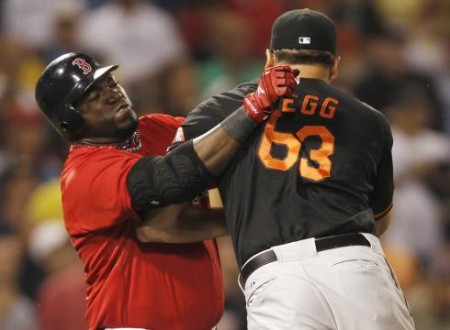 Ahoy! Welcome to the MONDAY MORNING COMMUTE – this is the spot where I share the bits of entertainment detritus that I’ll be rolling in over the course of the next few days! Sometimes it’s neat and tidy. Other times, it’s gross and ewh. In either case, after you stomp through my mind-muck, it’s your duty to hit up the comments section and detail what you’ll be up to.