Rumor: Is This ‘CALL OF DUTY: BLACK OPS 2’ Official Poster? 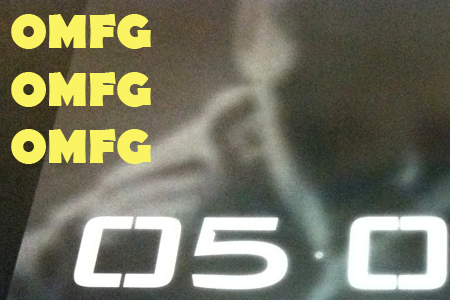 Is this the official poster for Black Ops 2? It would make sense.  It’s about that time of the year again when Activision pulls apart its slimy cheeks and begins to show the world the cresting head of the latest Call of Duty  iteration.

END_OF_DOCUMENT_TOKEN_TO_BE_REPLACED 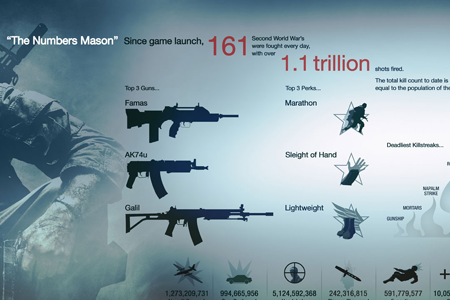 There’s another sexy Black Ops infographic on the prowl, this one courtesy of Activision. There’s some fucking ridiculous stats to be had.  Since launch, there’s been over one trillion shots fired, and there are one-hundred and sixty-one World War IIs fought everyday. Fancy some more stats? Hit the jump for the full graphic.

END_OF_DOCUMENT_TOKEN_TO_BE_REPLACED 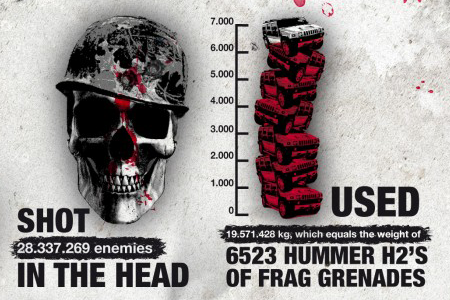 Righteous Dutch info-wizards Spijkermat came up with this infographic for Call of Duty: Black Ops. Some of the stats that occur in this virtual game daily are absolutely ludicrous. Thar be a lot of killing going on. Every 24 hours, more than 300,000,000 lives are taken. That’s more than the population of the United States.

Hit the jump for the entire graphic.

END_OF_DOCUMENT_TOKEN_TO_BE_REPLACED

Letters From The Black Ops Frontlines Are Full Of Pwn, Teabagging. 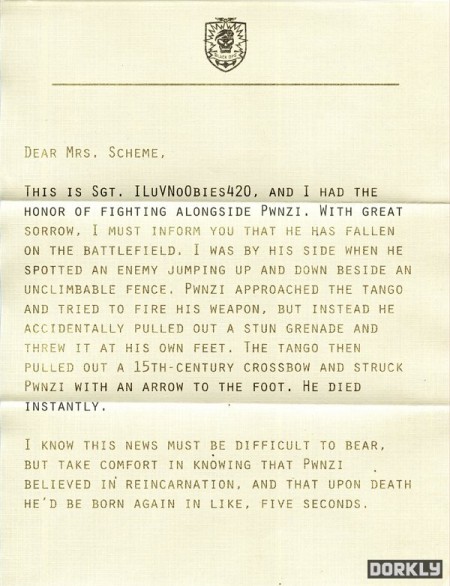 Over at Dorkly, they have some riveting letters from the “frontline” of Call of Duty. They are a testament to the world of Call of Duty. Wrought with douchebags jumping up and down (me), blinding themselves with grenades (me) and ultimately repsawning only to get knifed in the back while still too busy swearing (me).

Hit Dorkly for the rest of the epistles.

Most Pirated Game of the Year? Black Ops. 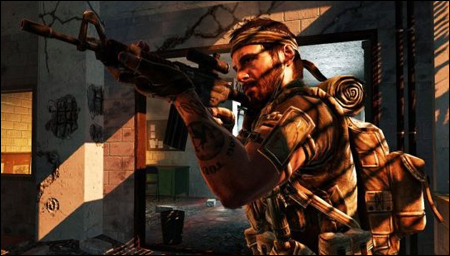 Arrrgh! It’s time to reveal the most pirated game of the year: Call of Duty: Black Ops!

According to a report from BitTorrent news site TorrentFreak, the PC version of Black Ops has been pirated an impressive 4.2 million times. The newest Call of Duty bested Battlefield: Bad Company 2 (3.96 million downloads), Mafia II and Mass Effect 2 to take home the most-stolen crown.

Thieves who own an Xbox 360 did their share in Black Ops stealing, downloading that console version 930,000 times, according to TorrentFreak’s numbers. Dante’s Inferno wound up being the most downloaded Xbox 360 game, with Super Mario Galaxy 2 sitting atop the most pirated list on for Wii owners. Congratulations all around!

It makes sense. Like, you know? The best selling game of the year is also the most pirated. Logic. It does things.

Black Ops Has Made A Cool Billion Bucks. 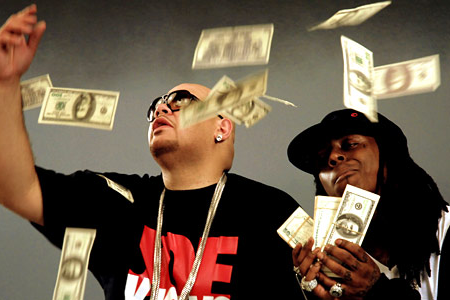 Not that I ever doubted the Call of Duty juggernaut, but I’m still fucking impressed. Today, Activision announced that Black Ops has surpassed one-billion dollars in worldwide sales. Jesus Lord. That’s a lot of motherfuckers playing, which is why it makes sense that   to this date “more than 600 million hours have been logged.”

Shit is selling at an impressive clip, outpacing last year’s Modern Warfare 2. This is undoubtedly awesome news to Treyarch fanboy and fangirl assholes, who will assuredly be parlaying this information into forthcoming message board arguments.

Activision Devil Guru Bobby Kotick was absolutely stroking his cock in virgin blood when he commented:

“In all of entertainment, only Call of Duty and “Avatar” have ever achieved the billion dollar revenue milestone this quickly. This is a tribute to the global appeal of the  Call of Duty franchise, the exceptional talent at Treyarch and the hundreds of extraordinary people across our many Call of Duty studios including Infinity Ward and Sledgehammer that work tirelessly on the franchise.  Our ability to provide the most compelling, immersive  entertainment experience, and enhance it with regular, recurring content that delivers hundreds of hours of audience value, has allowed Call of Duty to continue to set sales and usage records.” 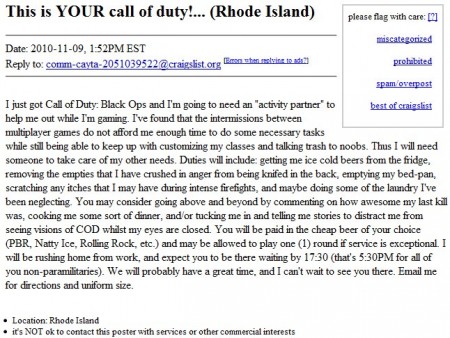 Who can say no to this shit? For starters, you get to wait on a dude hand and foot. Plus, you get free ass beer. And!, I bet he doesn’t realize you could totally gank those beer cans and turn them in for nickles. This shit probably isn’t legit, which is a shame, because I have a winter break coming up.

The Ending To Black Ops Is Amazing Dick Rock Stupidity 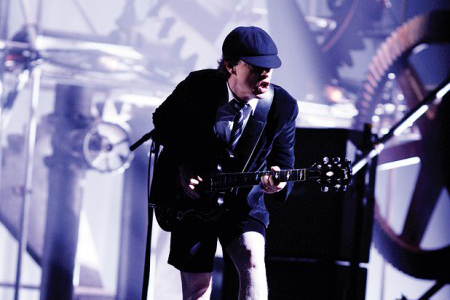 I finally beat Call of Duty: Black Ops last night. Took a fucking week! Goddamn, I need my elite gaming status revoked. You say I haven’t had in a while? I say your Momma’s tits sag but I’ll suck em anyways! Oh lord! Father forgive me for my brash delivery. I enjoyed the fuck out of the game.

I dug the single player, the story, the presentation, everything. They hooked me in with the gimmicky as fuck numbers bullshit. I mean, yeah dude, I saw LOST. I loved the numbers back then too. Interrogation, floating numbers! Flashing, hypnotic surreal cut scenes? It was all so predictable, but it worked. Listen, Call of Duty isn’t looking to reinvent the wheel. I always think of these games (well, MW, MW2, and this) as six-hour Jack Bauer-esque experiences.   If you’re looking for depth, go jump into an Olympic swimming pool! And drown! Ha, the Pepsi Max, it speaks to me in riddles involving penises, and vaginas, and talking grizzly bears.

But yeah. Fight Club twist? Generic, predictable, still okay. A riff on the typical brainwashing the US agent to do someone else’s bidding? Generic, predictable, but still okay. It was executed well enough to keep me satisfied. I mean, I love Fight Club. I love Ed Brubaker’s Winter Soldier storyline in Captain America. I’m break dancing gleefully to all of these tropes already. Why not keep spinning to the beat you already enjoy?

END_OF_DOCUMENT_TOKEN_TO_BE_REPLACED

Oh shit! The Call of Duty: Black Ops opening day crushes everything! A face full of steel to Avatar! A molotov cocktail upside the dumb face of Master Chief and his squadron of Spartans. Black Ops had the biggest opening day ever in entertainment history. That’s right, beating even the illustrious Modern Warfare 2.

How big is the biggest opening day ever in entertainment history? How about 5.6 million copies in the United States and United Kingdom.

Activision executive Thomas Tippl told an audience of investors in New York that Black Ops has sold $360 million worth of copies in its first 24 hours of release in North America and the U.K. this week, compared to $310 million in the first day of release for Modern Warfare 2 a year ago. Modern Warfare 2 sold a mere 4.7 million copies.

What is confirmed is my belief that despite their griping from either side of this divide, Call of Duty fans are dirty whores for the franchise. Despite what they may claim, they’ll buy anything. They bought Modern Warfare 2, and then despite Black Ops being developed by measly Treyarch, they bought this son of a bitch in droves as well.

Me? I look to shoot people in the face. In modern times, and in the Cold War. I’m going to be open with you goons, if it’s got Call of Duty on the front, I’m going to be interested enough to buy it. I am the self-admitted sucker.