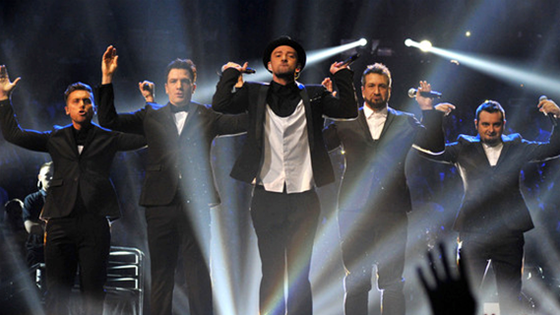 Hey, kids!  So it’s Wednesday, and I assume we’ve all calmed down after flipping our collective shits from the pop-culture orgy/last-train-to-nowhere that is the VMAs.  I’m old, and pop music gets me all kinds of jaded, but the VMAs still managed to teach me a lesson:  America THRIVES on nostalgia, even nostalgia that isn’t even 20 years old (see the above pic).  I, myself, am currently gushing over an “event” book that, when boiled down to its essentials, is nothing more than a comic scientifically engineered to tickle my 12-year-old pickle.  Thanos is my Justin Timberlake.  N’Sync are my Infinity Gems.  Comic books, particularly superhero ones, are every bit as nostalgic and regressive as the boy-bands and teen vixens of pop music.  So while I scoff at the proles going batshit over 10 year old hooks sang by grown men with receding hair lines trying their damndest to recreate moves no thirtysomething should have to attempt (looking at you Fat One), I massage my own nostalgia-boner to pretty pictures of ageless Avengers saddling up for one last ride into the aether in a story not quite called Infinity Gauntlet 2:  The Soich For More Money, but may as well be.

So hit the jump and let’s get nostalgic, shall we?

END_OF_DOCUMENT_TOKEN_TO_BE_REPLACED 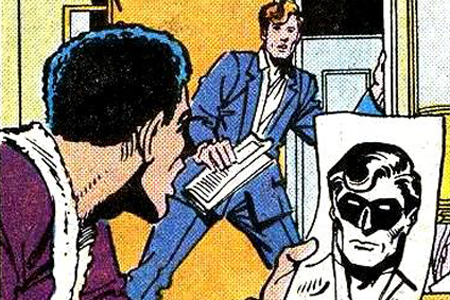 It’s that mid-summer moment where the comic books are twisting in my greasy palms, affronted by humidity and my general toxicity. Comic books! One of the great stalwarts of summers, the MEGA-EVENTS coming out weekly. Say what you will about the general quality of the EXPLODEY TIME STORY ARCS that permeate the shelves during the summer, I’ve come to need them just as a means of passing time. Like marking days off a calendar, they’re there. And they’re omnipresent. Keeping me company.

Like the drunk Uncle at the Christmas parties who you thinks annoys you, but then when he dies in a horror shit-show of cirrhosis and bloody vomiting, you miss him under the mistletoe. Trying to kiss your Mom, his first cousin.

I don’t know what I’m writing about anymore. This is Variant Covers, your weekly take on the tasty licks hitting comic books shelves.

END_OF_DOCUMENT_TOKEN_TO_BE_REPLACED 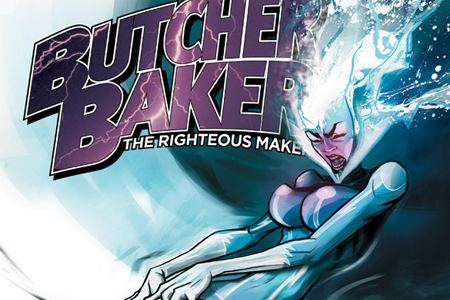 Ride me with! We have ourselves a rootin’ tootin’ motherfucking pull list to spit about. This is Variant Covers, the weekly column where us of the nerd predilection spout off the comic books we’re snagging tomorrow.

After a hiatus last week in which I graded final exams, wrote my own bullshit papers, and generally wept at the Sky Gods for forging such an unfavorable existence, I’m stoked to be back. There is a good goddamn backlog of comics I haven’t gotten to, and I’m using the semester break to tear gleefully into the ass of my Stack’o’Funnies. I’m coming for you, Detective Comics, Cowboy Ninja Viking Vol. 2, Black Hole, and hopefully others.

END_OF_DOCUMENT_TOKEN_TO_BE_REPLACED 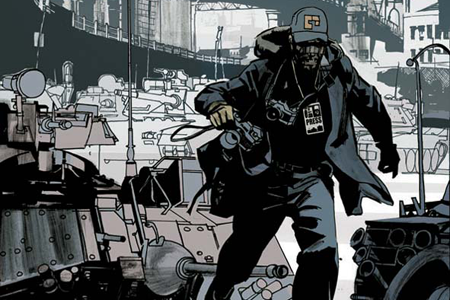 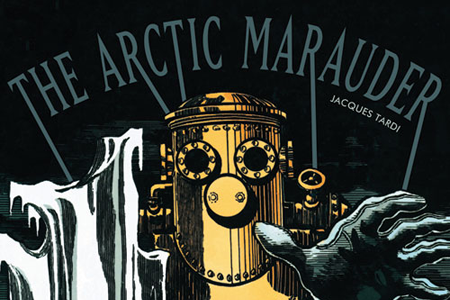 The Arctic Marauder [Graphic Novel].
These are several things I hadn’t heard of until today when I was browsing various columns on tomorrow’s comic book releases: icepunk, The Arctic Marauder, and Jacques Tardi. I realize this makes me a philistine. I apologize. This graphic novel is a rerelease of a 1972 work by the aforementioned Tardi, and it has me intrigued.

Published by Fantagraphics, the concept sounds fucking outstanding, “JérÃ´me Plumier, whose search for his missing uncle, the inventor Louis-Ferdinand Chapoutier, brings him into contact with the sinister, frigid forces behind this – and soon he too is headed towards the North Pole, where he will content with mad scientists, monsters of the deep, and futuristic submarines and flying machines.”

Color me ignorant but trying desperately to correct the problem. 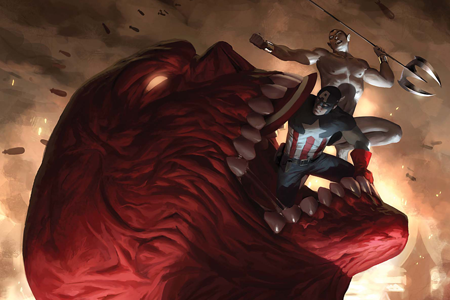 Fear Itself: Book of the Skull.
This would be the one-shot that is leading up to Marvel’s next event, Fear Itself. Normally I lob dung bombs at what I perceive to be obvious money-making measures in the comic book world. I know. However, I am also an  unprincipled  son of a bitch, and a huge Brubaker fanboy. What exactly is going to happen in this title? I don’t have a goddamn clue. But it does feature the Red Skull puking up Captain America and Namor, so there’s that.

If you’re really wondering, it has something to do with Red Skull’s daughter having all the dastardly secrets of her father, and she’s planning on doing…something also dastardly with them.

Also From Marvel: Uncanny X-Force 5.1. If you’re not reading this series, True Believers, this pig will catch you up. Trust me, it’s worth it.

END_OF_DOCUMENT_TOKEN_TO_BE_REPLACED

Variant Covers: I Got Scarlet Fever For Certain Boys! 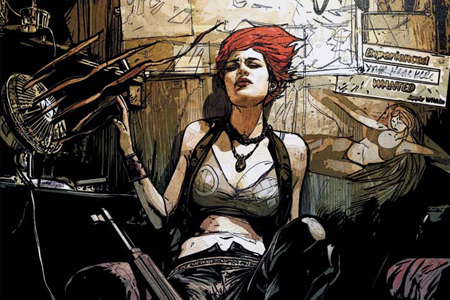 Variant Covers. Your one-stop shop for the comic books I’m excited about dropping this Wednesday. Your chance to comment, and recommend titles you’re reading not only this week, but in general. A brothel of pathetic attempts at intellectual dialogues, and more glaringly, juvenile jokes. Welcome, I’m excited you’re here.

Scarlet #3
In recent weeks, I’ve tried to ease up on my bashing of writers. Well, ignoring the fact that I took Mark Millar behind the woodshed. Particularly writers that I like, and respect. So whereas I used to bemoan Brian Michael Bendis’ decline, I’ve tried to rationalize it under the idea that he carries an enormous work load for Marvel. Far too many pages for me to fathom churning out every month. I know he’s a talented writer. I know it.

My brother and I are big fans of Scarlet, Bendis and Maleev’s creator-owned title being published through Marvel’s Icon label. As I’ve detailed before, the time that has been put into this book bleeds through in oodles of quality. Oodles, guys and gals, oodles. The title’s distinguishing feature is the smashing and tearing of the fourth-wall, with Scarlet talking directly to the audience throughout the book. Juxtapose that son of a bitch with Maleev’s creative use of paneling, and you have something that snags you by the nipples right away.

Scarlet’s recruiting a revolution, and she wants you to join in. Trust me, when a sexy femme fatale is talking to you, the loins surge.

It’s a solid title, with tropes that aren’t particularly new, but as I said, they’re executed well. Bendis’ wit shines through, and Maleev is fucking gorgeous as ever. The dude could pencil two pigeons fucking and I’d be on-board. The sort of artwork that could carry a title, but with the writing, simply compliments it.

Grab this son of a bitch. 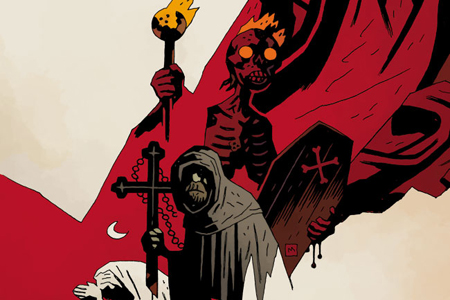 Baltimore: The Plague Ships #4
It seems like every time I turn around, a new issue of The Plague Ships is flying its way onto shelves. Get it, cause it stars vampires? Flying? I’m a fucking dunce? I concur. And that’s absolutely fine with me. While it isn’t righteous enough to command my full attention with every issue, the title entertains me in a mindless sort of way that I sometimes need. You should seem me when I’m reading an issue of S.H.I.E.L.D by Hickman. I got a pad of paper, and a pen. I’m scribbling notes and asking rhetorical questions like the grad school lit major loser that I am.

The Plague Ships is a way to decompress. I want to emphasize that this is no fucking knock on Mignola. The title is tight, entertaining, and extremely sexy in the artwork department. It operates on a level that I can definitely feel. Sometimes it’s perfectly fine to be nothing more than fun. For the burgeoning intellectual who is going to give some brilliant reading of Plague Ships in the comments box, let me stop you: you’re probably right, but I’m turning my fucking brain off for this title, and riding the wind. Get it? Like a vampire? Yeah, fuck me. 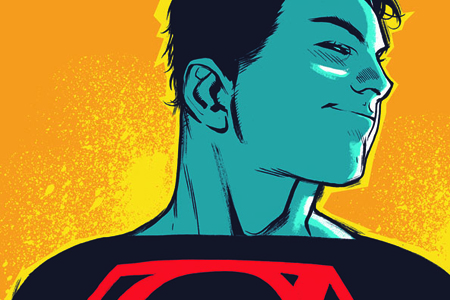 Superboy #1
Lest you think I’m packed to the gills with dookie when I say I’ll read anything you recommend to me, consider this: prior to about six months ago, I had never heard of Jeff Lemire. A reader with good taste recommended that I snag up Sweet Tooth and I did so. Since then, my ass crush for the dude has been immeasurable. Love him. I’ll admit I’ve only ingested seven issues or so of his work, as I can only grab Sweet Tooth in TPB around these parts, but I dig him.

So with that said, his name alone is enough to push the relaunch of Superboy onto me. What’s it going to be about? Damned if I know. The synopsis promises wonder and the beginning of the next great epic in the DC universe, but I mean, c’mon. That’s cream puff bullshit. All I know is that it’s a very talented writer getting a crack at an up-and-down icon within the stretched parameters of Metropolis.