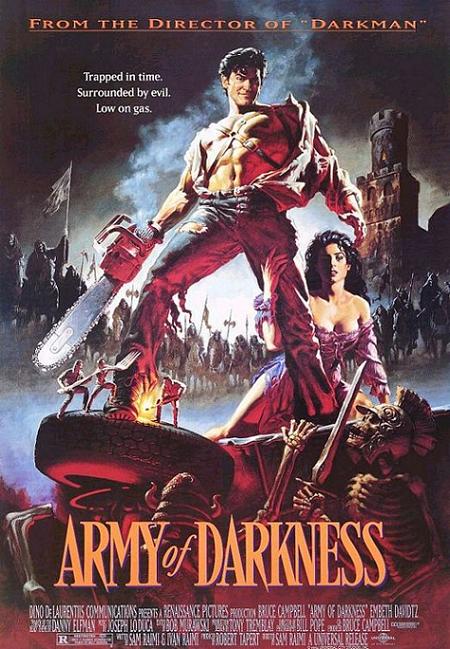 Through all of its events, OCTOBERFEAST has been a commemoration of not only pop culture’s most terrifying and vile aspects, but the genuine joy derived from them as well. Just as Young Frankenstein illustrates, the combination of horror and comedy creates a synergy only rivaled by peanut butter and chocolate. But as much as I love Mel Brooks’ monster-movie homage, it is essentially a comedy that happens to use horror characters. In  truth, there exists a more even balance of horror/comedy/adventure.

Perhaps the best example of this cinematic joint-effort is Army of Darkness. Sam Raimi’s 1992 movie is the third (and best) part of the Evil Dead Trilogy. This concluding chapter picks up right where Evil Dead 2 left off — Ash, a man who has battled the possessed corpses of former friend on two occasions, has been transported to Medieval England. In order to return from the year 1300 CE, Ash has to retrieve the Necronomicon (the book of the dead featured in both predecessors). Of course, this means getting involved with warring bands of knights and battling the undead.

While this may sound like a decent flick in and of itself, the beauty of Army of Darkness is found in the protagonist Ash Williams. Unlike most heroes, Ash is kind of an asshole; he runs his mouth, tells people off, and is always trying to help himself out. Take, for example, his response to the once-possessed Sheila’s attempt to apologize for her former actions: “First you wanna kill me, now you wanna kiss me. Blow.” Such one-liners, delivered by the amazing Bruce Campbell, are nothing short of genius.

Shit. Forgive me if I’m backpedaling here, but I feel like I need to pause for clarification. Ash is great not only because he’s a charming douchebag, but because he pushes the limits of ridiculous. Just contemplate this — when first appearing in Army of Darkness, Ash has a chainsaw attached to his hand. Also, he is a big fan of his shotgun, to which he lovingly refers as a boomstick. Observe the following:

But Ash isn’t the only redeeming quality of the movie. Army of Darkness succeeds in its willingness not to take itself too seriously. Sure, there are monsters and dead bodies and all that creepy stuff. But everything in the movie is treated with a slapstick sensibility; as a result, the entertainment value is doubled, as every scary monster evokes waves of hearty laughter that is usually only heard during Three Stooges episodes. The cheesy, campy nature of Army of Darkness puts it a step above others, showcasing the fact that the movie is first and foremost intended to entertain.

I’m fairly certain that I haven’t done Army of Darkness justice. But if you believe in the power of OCTOBERFEAST, you can believe in this movie. I mean, seriously, there are lines like Yo, she-bitch! Let’s Go! & Hail to the king, baby.

Tonight is Halloween Eve — I plan on watching Army of Darkness. You should too. 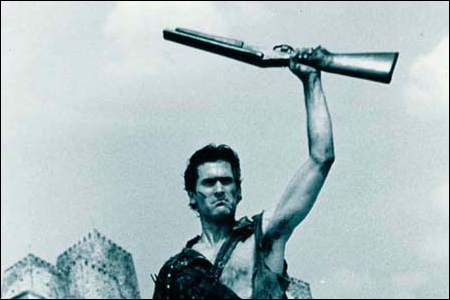 Bruce Campbell is fucking awesome. It’s a scientific fact. If you don’t like Bruce Campbell, I’d fancy beating your head in with a can of Spaghettio’s. And then I’d drag your useless corpse to your parents, and say, “You made this refuse, please recycle.” So when I hear that Bruce Campbell is going to have a ‘larger’ role in Spider-Man 4 I get sort of excited:

According to the info garnered by Access Hollywood, Campbell is expecting his role in the next film to be “a major part.” Of course, they translated this in their headline to there being a “villainous role in the works” for the actor, despite the absolute lack of evidence to support this supposition.

I don’t think anyone with a functioning frontal lobe (which sadly isn’t as many people as I’d like) can defend the asshole vomit that is Spider-Man 3. It was terrible. And the sequence in which Peter Parker dances in a jazz club was straight out of…I don’t know. I don’t even have a funny remark.

As bad as it was though, Sam Raimi is fucking rad. Everyone and their dog knows that Raimi had Venom shoved down his god damn throat, and he didn’t really dig the guy, et cetera. So let’s float the guy a mulligan, why not? Drag Me To Hell was the sleeper movie of the summer, and I enjoyed the crap out of the first two Spidey movies. Maybe if they let him rock out with his cock out like he wants to, and they don’t jam their conceived notion of what the film should be, it’ll be sweet.

Now they just need to find a way to make Peter Parker not look like a wimpy douchebag who needs to get over his Uncle’s death. And recast Kirsten Dunst. Who has the worst teeth this side of Anna Paquin.