‘House Of Cards’ Season 3 Teaser: A little more of a smile, please

END_OF_DOCUMENT_TOKEN_TO_BE_REPLACED 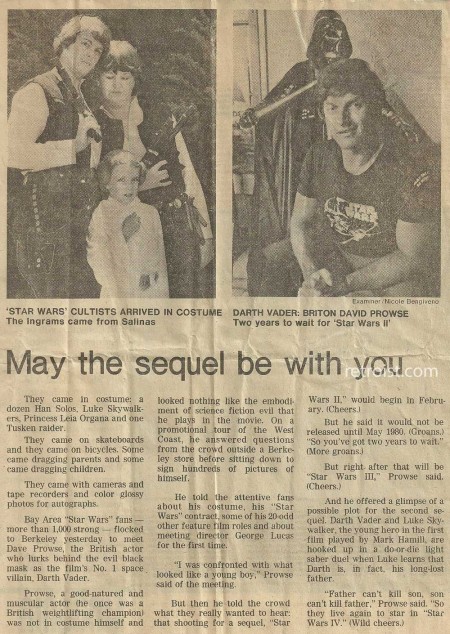 Back in 1978, the man behind the stature of Vader, David Prowse dropped a bombshell on an adoring crowd in Berkeley, California. He revealed that he was, in fact, Luke Skywalker’s father. The crowd went bananas batshit about the information. The most impressive part? The dude was probably full of shit.

As everyone knows by know, even George Lucas didn’t have a fucking clue who Luke’s father was. His father’s identity was bandied about, and for a while it was considered to be Obi-Wan. In fact, even when it was decided that it was Vader, Lucas had Prowse say the lines “Obi-Wan killed your father!” (fixed to save geeks from apoplexy) while filming the ultimate emo-kid asshole scene of the actual reveal. James Earl Jones’ dialogue with the actual paternity megaton was dubbed in later.

So did Prowse know before everyone else? Or was he just spitting garbage? Either way, it’s amazing. And as io9 points out, this was before the internet. Shit like this happened now, it’d be everywhere, and Lucas would probably have Prowse assassinated.