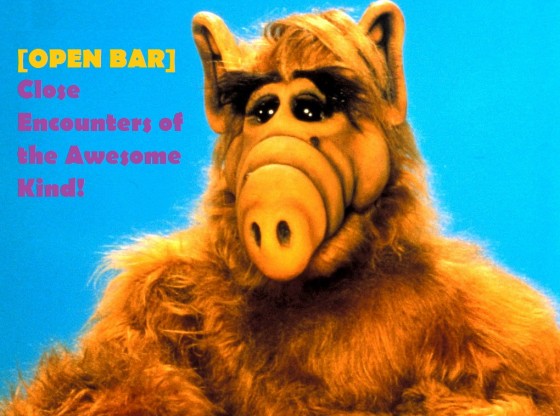 Love `em or fear `em, there’s no denyin’ that extraterrestrials are an absolute fixture of our pop-culture consciousness.

Aliens have been depicted in variety of forms, from the benevolent bestowers of universal knowledge that helped build the pyramids to the nefarious sons-of-bitches that ruined Jeff Goldblum’s Fourth of July. Some spacemen want to go home. Others just want to call their folks. And the worst of `em want to kill Danny Glover.

Coming from outer-space (and thus being the most foreign specimens imaginable), aliens are elicit more fear, joy, and awe than anything on Earth. Who amongst us hasn’t looked to the skies and wondered whether or not we’d be visited by someone – or something – from beyond? You might’ve been inspired or horrified or curious, but I have no doubt that the thought’s crossed your mind.

So, the prompt for our open-bar: Who is your favorite extraterrestrial?