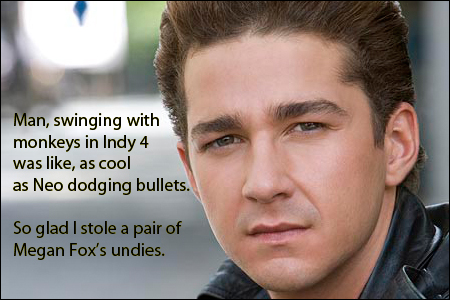 According to Tout Le Cine, Ford told the assembled press at Deauville that he, George Lucas and Steven Spielberg have agreed on the maguffin for the fifth film. Well, my translation software doesn’t say the ‘fifth maguffin’ but the ‘fifth element’ – I hope he wasn’t just talking about the Luc Besson movie.

What the fuck. Guys. Come on. The Indiana Jones awesome to suck ratio is so friggin’ high. Don’t start diluting that. Did you ever think that there would be as mad awful Star Wars movies as there were stellar ones? Kingdom of the Crystal People With Adamantium Skulls featured Even Stevens swinging on vines with monkeys. Please. I beg you. No