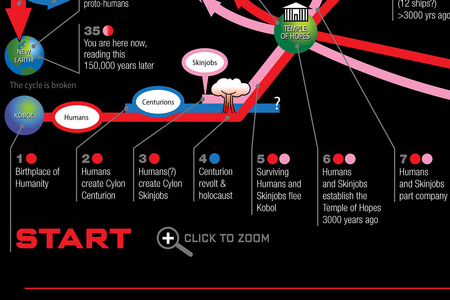 This infographic is handy for all you toaster-frakin’ newbies out there. If you can’t decipher the simple (ha!) and cleanly delininated (doubly ha!) timeline of Battlestar Galactica, than this will clear up any confusion.

I created this visual timeline of the Battlestar Galactica universe after the season 4, episode 17 “No Exit” data dump resulted in near aneurism for my friends and me. I later updated it to include key points from the “Caprica” pilot movie.

Billy, I appreciate the effort. The infographic is dope. But let us all combine hands, minds, and hearts, in willing the Caprica series, even it’s fucking pilot, out of existence.

Hit the jump for the full infographic.

END_OF_DOCUMENT_TOKEN_TO_BE_REPLACED

Patton Oswalt Elaborates on His Caprica Gig, While I Scream 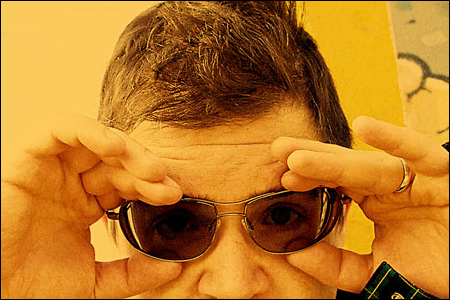 Patton Oswalt is going to be on Caprica. We already know this. When I found out, I almost went comatose. Oswalt, much to his chargin I’m sure, is a hero amongst us pudgy nerds. He references X-Men in his act, he is the voice behind a Pixar film, and oh yeah – he has your dream gig, acting in a motherfuckin’ BSG spin-off. The dude is a god. A brilliant, incisive God who was probably one of the few highlights of Dollhouse this season.

I stumbled across this quote via /Film, who nabbed it from A/V Club:

I’m just going to be a sort of Jon Stewart-esque presence that’s always going to be on television in the background. I think that’s going to be the role I have, though there’s a big confrontation I have with Eric Stoltz and Paula Malcomson.

A recurring role as Caprica’s equivalent of Jon Stewart? Sign me up. I was cautious about Caprica, and how it was going to impact the re-imagined BSG mythos. But the pilot talked me off the edge – a mixture of good ole Phillip K. Dick, and Snow Crash and various obvious references. Sure, maybe the Cylons are going to end up the weepy product of a guy losing his daughter (fucking ugh), but for once I’m going to try and not hate. It’s got Moore’s blessing. And now, more importantly, it’s got fucking Patton Oswalt.