Brutal Legend Demo Is An Axe To The Face 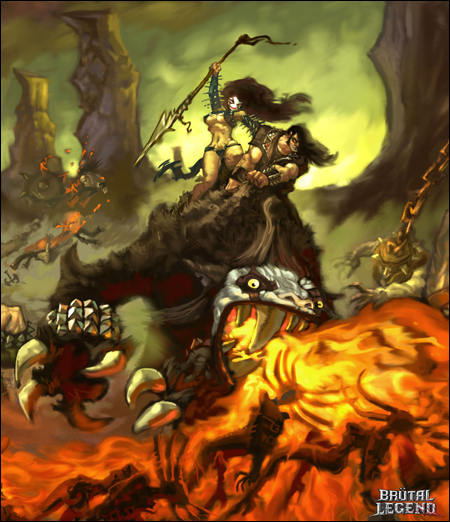 When I heard that the Brutal Legend demo was available to people who pre-ordered the game at Gamestop, I got my uncleansed ass to the store today. I threw down five dollars and giddily stared at the download bar as I penetrated my 360 hard drive with metal thunder.

All of this would be just another sloppy homage if it weren’t for the fact that the gameplay seems to deliver. Mastermind behind it Tim Schafer throws the kitchen sink at you. You have metal-Zelda gameplay, driving a god damn hotrod, and some Prince of Persia style teaming-up with said Hot Topic chick.

And then to close it off, they preview the rest of the game while blasting Three Inches of Blood’s song “Deadly Sinners”. What sort of homo would like a 3IOB song blaring while a trailer plays? Someone like me, who rocked out to them to the point that I named my WoW guild after them.

The line starts behind me to give Schafer a blow-job.