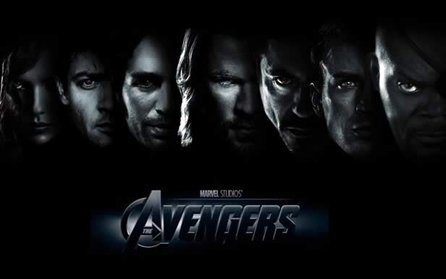 The Avengers should be as necessary to you this weekend as breathing, if:

–  You saw and enjoyed the Marvel Universe films of the past five years — like Iron Man, Thor, and Captain America.

– You have a fucking pulse.

If two of these things apply, you’ve probably already seen it.   If all three do, you saw it last night at midnight like the rest of us. 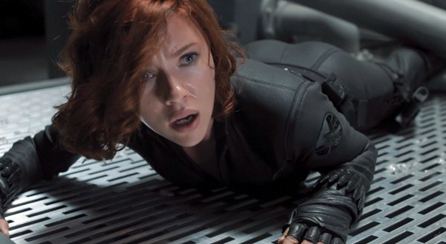 I don’t know if the rest of you were as incredulous as I was five or six years ago when the first rumors and words about an Avengers film were being bandied around the net.

Multiple, individual Marvel U films?   Sure.

A culminating film that totally banked on the success and buildup of its independent predecessors, that tied together films with totally different production lines, budgets, and creative teams into one coherent whole, that retained the spirit and essence of the five films, and still had the voice and creative signature of its own writers and directors? How could this fucking exist, in Hollywood? 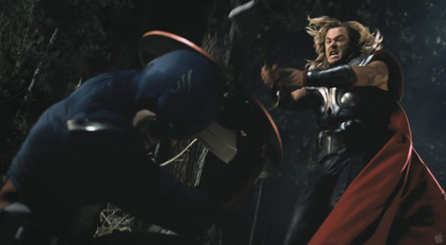 It did.   It does.   It’s a miracle on the screen that reminds us that the high-spirited fun of comic book movies can live and thrive alongside the 2000’s popular and dark, Nolan-esque adaptations.   And more: that we need that contrast, and that it’s very welcome in a summer that might otherwise be dominated by the Dark Knight.

Every review I’ve read of this film either breaks down the plot for its readers, or specifies cameos and character arcs, or actually spoils some of the witty lines that had my midnight audience rolling and applauding in surprise.

I’ve been reminded by Joss Whedon and Zak Penn just how incredible the surprise can be, of a well-placed quip, of a classically executed callback you didn’t see coming, of the importance of balance in an ensemble cast.   Why would I spoil those surprises, and that pacing?   You’re going to go see this film.   Let me help you understand how you’ll enjoy it, instead of telling you what you’ll enjoy and stealing those moments from the screen. 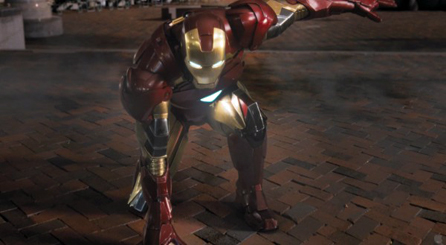 This is the collective sequel to Iron Man 2, The Incredible Hulk, Thor, and Captain America: The First Avenger.   The Avengers knows this, and expects you to know it.   And thank goodness for that.

Deftly placed lines or sparse flashbacks will reorient you to where a team member’s story was left at the end of his or her film, but it’ll be up to you to remember their real motivations, inner conflicts and feature-length histories to have true appreciation of everything this new film has to offer.

Like The Two Towers and Return of the King did a decade ago, this film charges ahead with new content and new problems, building on its prequel material, and expects you to keep up, offering exactly the amount of help you’d need to keep up with its pace.   It’s artful and exciting, the economy of dialogue and editing that’s at work in this marvel. 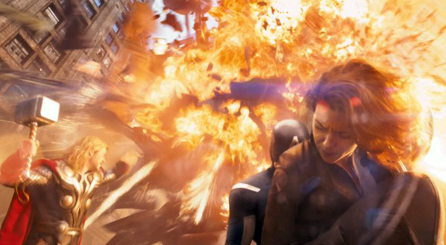 A fairly dark introduction, thematically and visually, is consciously contrasted against the assembly and first test of the Avengers team on screen; bright, colorful, like comic panels exploding to life on-screen.   You’ll curse the plague of 3D as many early dark, grey and brown scenes are made even darker by those infernal fucking glasses, but the voice of the film will sing clear through it, rest assured.

The traps this film was assuredly going to fall into, that it avoided or outright destroyed:

–  Every character matters.   Balance.   You’ll find yourself unable to disagree; even Avengers addendums Black Widow and Hawkeye who guest-starred in Iron Man 2 and Thor make perfect, clockwork sense here.   Simple, straightforward stories that bind themselves necessarily into the larger Avengers plot, and field performances on the team that earn their memberships over tenfold.   When you realize at the film’s end that, relatively speaking, the team member that may have been least essential on the field was Captain America, you know you have a team of truly mighty heroes.

– Dialogue black holes of exposition, technobabble and strategizing.   Every time you think it happens, the problem is subverted, by humor or interrupting surprise.   Joss knows how to avoid losing an audience’s interest by self-reflexively calling attention to the very apathy that might set in when words encumber a scene.   He makes fun of it.   He plays with it.   He breaks it, and builds it up again with a simpler reconstruction of meaning, so that everyone is always caught up, minute to minute.

–  Bourne-Hunger-esque Shaky Cam, Close-Up-Riven, Nausea Overload.   No.   Even with a layer of unnecessary 3D casting a hazy blanket of claustrophobic magnification over the film image, the sense of spacing and composition in every shot, and every action sequence is obvious.   With rare, specific exceptions, you can always tell what’s happening on the screen by virtue of liberal use of longer takes and longer shots.   Bless these decisions; they make almost every single frame of action rendered on screen pop the way a panel in a comic book would.   Phenomenal.

Lest this sound like a corporate-bought drool spread of the film, let me put my thinker’s cap on and tell you where this film could’ve been stronger.   These paper cuts on the film’s meaty flesh knock it down from a 100 to a 99, at worst. 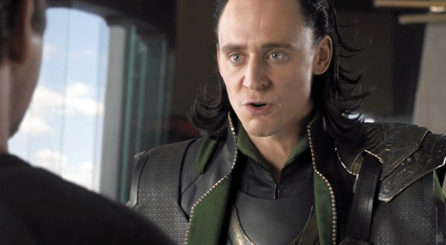 –  The Villainous Presence.   If you know what the Avengers are about, or have even just seen a trailer, you know that in many ways, their first obstacle is always themselves.   That is, the logistical and emotional problems of cramming this many egos and powers into one team and asking them to push in the same direction.   If you’re as content with this problem being The Avengers’ main villain as the film itself seems to be, then we’re golden.   If you’re looking for external antagonism, in Loki, and the various other forces that mass against the team, this is where you’re going from 100 to 99.

It’s all great, and the enemies all have their moments, whether in Tom Hiddleston’s second, venomous, scene-stealing turn as Loki (surprising everyone like me who never thought he’d make an adequate first super-villain for such an immense film), or the sheer destructive power of the ‘army’ that you’ve seen decimating Manhattan in every trailer for the film.   The only problems: this army is faceless and derivative, leaving all villainous presence to Loki.   They end up registering as an intense physical challenge for the team to deal with, an extraordinary trial by fire to test their teamwork, but nothing more.

Loki then only stumbles as a character when you realize that neither Thor nor this film properly address what the limits of his powers and abilities are.   You’ll often wonder why some battles go the way they do, or why a character winds up where they wind up; Loki’s positioned as a demigod like Thor (or is it full god?) but what he’s strictly capable of is more…fluid.   And when an enemy’s abilities, cinematic or literal, aren’t strictly established, it becomes harder to properly appreciate the results of a conflict; was he truly just knocked out in that scene, or is he immortal and just going to get right back up?

The wonderful thing is, you can turn off the part of your brain that even thinks about all this, just fully embrace the man’s scathing wit and poetic drama and just go with it.   It’s a comic book movie! 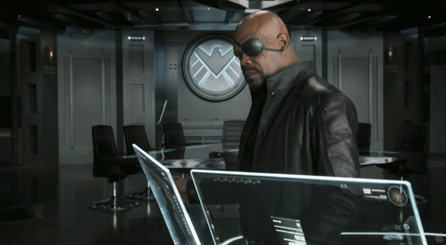 –  Soundtrack.   Yeah.   It’s a comic book movie.   A Hollywood blockbuster.   But damn if Nolan’s Batman trilogy hasn’t proved that the biggest of the big can still have a distinct aural signature, a tempo and a fever that can be felt like a pulse.   The Avengers gets a serviceable orchestral backdrop that guides your emotional journey appropriately; no surprises, save just one that immediately pops into memory and offered hope for more.   For viewers that have seen the film, you’ll know what I’m talking about.   The scene in question was earlier, and both violins and an eye were involved.   That was some kind of reverberating majesty that I didn’t think would happen in a Marvel Studios film.   Good show.   Kudos also for the moments where silence let the dialogue sing out and stand on its own.

Wait.   We’re still in the negatives column of the review, right?   Shit.

And finally, a comment that I don’t know how to slot in.

– Fan-service.   Nerdgasmic, overzealous, Whedon-doused Fan-service.   This is an enormous, marvelous massive YES in the positives column for me, and I trust, for all the members of Spaceship Omega-Level.

Come to think of it, I don’t know who it would be a negative for.   The newcomers in the audience may not understand why a particular battle-technique, or line of dialogue, or sudden character appearance is turning the audience around them into slavering, pants-shitting, exacerbated applause machines.  So it shouldn’t bother them, unless they don’t like being in on the joke.

And why should it bother us?   Maybe, just, that we’re so aware of the film trying to endear itself to us with every bit of fan-service, even when it doesn’t have to, and can just rest on the immense strength of its strong, cinematic laurels. 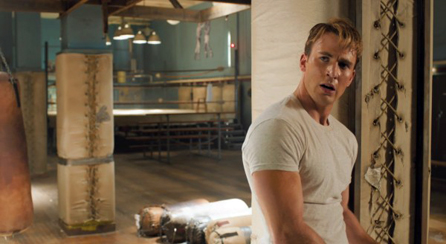 No, I’ve decided.   Every bit of it deserved to be in there.   Those moments, lifted as they may be from the comic canon or even the popular culture that the funny books have seeped into, and easy as they may have been to insert into this spectacle, they were necessary.   They were almost baked into the promise of The Avengers made years ago by Hollywood.   If we didn’t get them, we’d be here bitching that we didn’t get them.

There’s a hardcore minority out there already pissed that the film doesn’t house an essential bit of dialogue that might be as essential to the Avengers as the word “bub” was to Wolverine.   All I can say is, we’re in it for the wrong reasons if we have to get our pants in a bunch over that, in the face of so much else, so much else, that this film does right.

Go see it.   Don’t leave for a piss-break; every single scene manages to be indispensable.   Don’t miss a line; everything that deserved a third-act callback, got a third-act callback.   Don’t fucking leave early; the mid-credits and post-credits sequences are both incredible in their own ways. 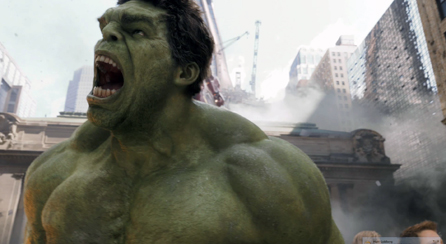 Do ensure that you’ve seen the preceding Marvel universe films before coming into this one.  Do spend the hour after the film recalling and reciting the innumerable, truly innumerable classic lines of hilarious dialogue.  Do attempt to prepare for the artistry in edging that is the Hulk’s withheld, restrained and then ultimately orgasmic appearance.

And do appreciate that this is the most sheer fun a comic-book film has ever been, or likely will be for years to come, and be grateful that Hollywood allowed a master of television and just one major feature film — Serenity — to marry his sense of wit, pace, character and storytelling to the one of the biggest film franchise events in history.

It is un-missable and unforgettable, and should be respected for the absolute triumph of marketing might and risky power playing that brought it into existence, nevermind the fact that it’s a damned well-made film.