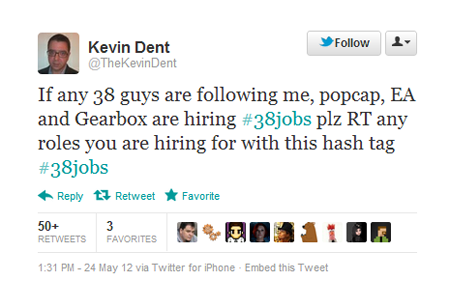 38 Studios had to lay off its entire goddamn staff. The entire thing. Not much of a surprise considering their first game had to sell three million  to break even. Thankfully the gaming industry is striving to help out the unemployed workers.

The  sudden firing  of all 379 employees at 38 Studios and Big Huge Games today was a blow to the industry, even for those of us who expected it. Soon after news broke, many developers, artists, designers, PR people, journalists and fans took to the Internet to express frustration and anger  — and to help.

On Twitter, the hashtag “#38jobs” rose to trending in the US, with people shouting out which studios were hiring and generally sending support to those let go today. A  Facebook group  titled “38Jobs” popped up around the same time. Freelance games journo  Alex Rubens  gathered all of these jobs tips into a Google Doc that currently sports 84 studios with openings, including Irrational Games, Bungie, Activision, Klei Entertainment, Rockstar and other major and indie companies.

Access the full list  here; it is still in the process of being updated and refined, courtesy of Rubens and The Side Of The Gaming Industry That Proves We’re Not All Trolling Douchebags.