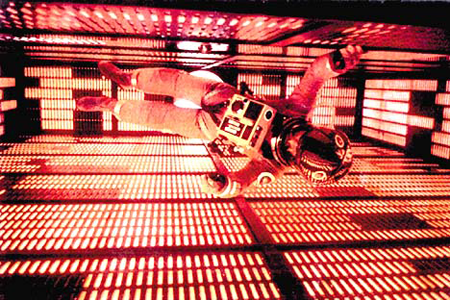 Something I’ve never really thought of: how computers would stand up to the unkind blasts of radiation in space. Thankfully there are smarter people out there, who can think of space without inevitably diverging into “like, we’re all from the Big Bang, mannn” like me.

While semiconductors replaced vacuum tubes as the go-to way to conduct electrical current in our gadgets decades ago, scientists are looking to bring them back for computers used in space. The fact that semiconductors are cheaper and easier to build made them a good replacement, but since vacuum tubes stand up better to radiation, researchers at NASA’s Ames Research Center and the Korean National Nanofab Center have created a tiny version designed for the harsh conditions in space. The prototype is called a vacuum channel transistor, can be incorporated into a circuit, and was built using the same process used for silicon semiconductors.

Right now the 150 nanometer-long device can operate at under 10 volts, but researchers believe that this number can be cut down to just 1 volt over time. It’s also very fast, operating at frequencies of up to 0.46 terahertz – quite a bit faster than standard silicon transistors. These two factors are good news for NASA, which, according to engineer Meyya Meyyappan, can spend up to a few years making a computer radiation proof – “otherwise the computer you put in the space shuttle or the space station basically will get zapped and stop working.” Unfortunately, as of now there’s no word on when the tubes might make their way into NASA’s computers.

Godspeed, NASA. Build the computers that take me to Mars.