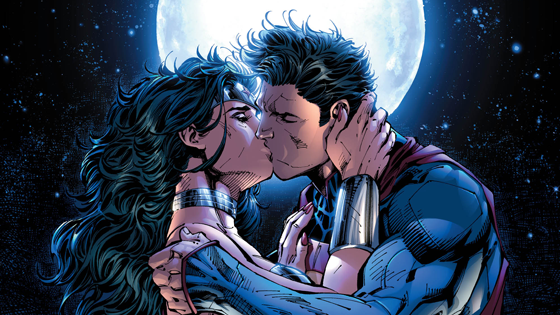 Doesn’t matter that it has been nearly a year, the New 52 continues to entertain. You know, with its opaque canon. With its head-scratching decisions. One of those decisions being to send the DCU’s trajectory full Kingdom Come.

Even as the debate still rages over last week’s revelation that Superman and Wonder Woman begin a romantic relationship in the new issue of Justice League, The Associated Press introduced a potential new wrinkle: that in DC Comics’ New 52, not only have the Man of Steel and Lois Lane never dated — something readers have known for more than a year — but that they “likely” never will.

However, a DC spokesman told Comic Book Resources the latter assertion “definitely” didn’t come from the publisher, which has characterized the story development as “the new status quo,” one made possible by the year-old relaunch that wiped clean much of the history of the DC Universe.

“The way Geoff [Johns] unfolds the story and the implications of two of the most powerful characters in the DCU becoming a team is something that goes beyond the question of ‘What about Lois and Clark?’” DC co-publisher and Justice League artist Jim Lee told The AP. “This is a statement to every nation and geopolitical organization in the entire DC Universe giving creative teams ample material to explore this relationship on so many different levels.”

The contention that Lois is “still around, but the two have never dated, nor are they likely to” isn’t attributed to either Lee or Johns, and may have been a bit of extrapolation by the reporter. That said, it’s easy to see how someone might arrive at that conclusion. After all, it’s a sentiment expressed earlier this year by Superman Group Editor Matt Idelson in a Q&A on the Superman  Homepage, where he said, “Clark and Lois are NOT inevitable, and in fact it isn’t going to happen, at least while I’m on watch duty. There will be romance of varying degrees in both characters’ lives in the months to come, but not with each other.”