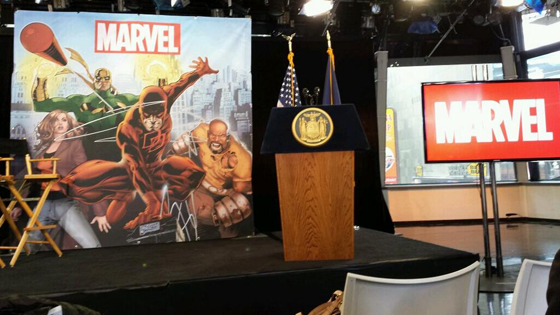 Talk about an endeavor! Marvel is intending to film sixty fucking hour-long episodes in the City of New York. That’s a lot of episodes smelling like homeless people grilling on the grates at Times Square and pizza. Naw — just kidding — snark power down! — this is a pretty impressive attempt.

Filming in the biggest U.S. cities can be incredibly expensive. Thanks to the costs of permits, security, and simple logistics, to actually film on location in New York City or Los Angeles is not financially feasible for many major productions. But most major productions aren’t backed by Marvel or Disney. Wednesday, New York Gov. Andrew Cuomo announced a special, multi-million dollar incentive program created specifically to lure Marvel Studios to New York to film the entirety of its Netflix series of shows, That’s 60 one-hour episodes total, which will now be shot in NYC.

The Wall Street Journal first reported the news. According to their report, Marvel and its parent company Disney were looking at several different places to film the five shows: Daredevil, Jessica Jones, Iron Fist, and Luke Cage leading to The Defenders. Since the stories are set in New York, and this deal was made, that’s how it’ll go down.

Each series will be 13 episodes, and then The Defenders will be 8. It’s described as “Marvel’s ‘flawed heroes of Hell’s Kitchen’” series. Filming will start this summer withDaredevil. (Hell’s Kitchen, located on the west side of Midtown Manhattan, was a fairly rough working-class neighborhood when stories were first set there in Marvel comics. Since the ’90s, however, it has been greatly gentrified and is very different from the place originally stalked by Daredevil in the ’60s and ’70s.)

We’ll update when there’s an official press release or more information, but the fact New York state would create a special tax incentive package – worth around $4 million – to lure Marvel to the city is unusual and exciting.