Archives
« The ‘X-FORCE’ MOVIE will feature a 5-Person team. Plus! So many pouches.
Dude HACKS ‘CONTRA’ ROM to PROPOSE to girlfriend. Nerd Legend. »

Opinions Vary: Summer Movies Should Be More Than Fleeting Entertainment 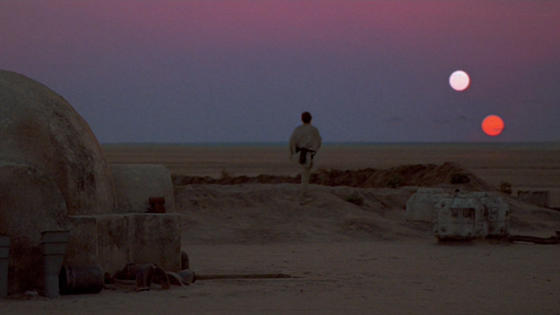 One of the neat things about such a small, tight-knit community is that narratives can begin to grasp hold. Throughout this very summer, the lot of us have discussed the latest crop of Whiz-Bang Hollywood Fecaltainment. As the movies have arrived, we have all received them in a variety of manners.

More than anything, I think I could be typified as generally disappointed by this latest crop. As movie after movie has been released I have been somewhat entertained. But for the most part, I have found them to be ephemeral, forgettable piles of crap.

Butting heads with even my own brother who (whom?) I typically see eye-to-eye with, I began to ask myself why I’ve been so disappointed. I figured I’d use this Opinions Vary to articulate my feelings. Namely, that this summer’s blockbusters have been bereft of Goosebump Moments, and that I don’t (and shouldn’t) accept middling efforts when this very genre is capable of capstone experiences and inspirational wankery.

A short story, perhaps irrelevant. When I was getting my graduate degree at UMass Boston, my professor and mentor recounted a story. She spoke of an academic who was asked how they would like to be categorized. The academic paused before responding with “…as long as I’m not the next Carl Van Vechten.”

Van Vechten was a patron of the Harlem Renaissance, and the Caucasian writer of the polemical Nigger Heaven. People shudder at being grouped with him, because despite his contributions he is considered at best odd, at worst an exploitative influence.

How does this relate?

My vitriol with this summer’s movies has been genuine. I suppose that is all I want to make understood. I’m not posturing for page views, or attempting to troll. So for the length of this article I’m going to strip down the hyperbole, and probably come off saltine-bland.

But no matter what, I just don’t want to be considered “the next Devin Faraci.”

III. It isn’t about flaws

The first thing on my docket that I identified was that I wasn’t let down by these movies purely because of how flawed they are. Star Trek into Darkness is an objectively terrible script. Smarter people than me have delineated the ways in which it blows. But you know what — who cares? I love a litany of flawed movies. I love The Dark Knight Rises, and I can accept that the movie’s script is out of its fucking mind. All over the place. Rushed, forced, messy.

And I mean — The Avengers. Probably one of my favorite movies ever, and I’m going to level with you. The script is full of heart, and humor, and…general confusion. Has anyone figured out why Loki let himself get aboard the helicarrier? Eh? You have? Well, I’m still confused.

Same goes with Skyfall, the original Star Trek reboot, Inception. They all have their flaws (and listen, some more than others. No doubt.) However, my love for the movies is able to transcend their plot holes and their awkward pivots.

Why am I so fucking bummed out this summer? I tried to recall the movies while trying to figure this out, and then I realized I had a hard time recalling the movies at all.

At some point I realized that my dejection this summer is centered around the fact that I’m not carrying anything out of the theater. By the time I wake up the next morning, I’ve forgotten everything that occurred in the movie. Or rather the movies have distilled themselves down into indistinguishable slop. A cavalcade of special effects, Lots of Destruction, and bombastic music.

I’m so down on this summer’s crop of movies because they haven’t offered much in the way of rousing moments. Now listen I am happy to admit this is a subjective comment. But I’m articulating my emotions so fuck you and sit down. I’m just kidding, you’re probably wonderful. And I have emotional problems. So really you should sit down so I don’t fling half-chewed feces at you.

I can’t remember a fucking thing from Star Trek Into Darkness. I’ve challenged both Rendar and Batemen to provide one memorable line from the villain and they’ve failed to do it. To them, that’s okay. And at this point I don’t want to syphon enjoyment away from them. I don’t want to take away their happiness.

And as crazy as it sounds, I think that’s why Pacific Rim is on its way to being my favorite movie of the summer. Pacific Rim isn’t a remarkable movie. It isn’t transcendent. Prior to release, there was laughable Star Wars of our Generation comparisons from sycophantic members of the movie blog guild, and my goodness they look even more ridiculous in hindsight. However, the movie has given me more enjoyable moments than Man of 9/11 Homages and Star Trek Into Darkness combined.

Again, this is purely subjective. I know that.

But I’ll take the rousing main theme of Pacific Rim. I’ll take that boner-inducing prologue where I thought I was in for something special. (I wasn’t.) I’ll take the absurd rocket elbow, and the deployment of the sword to fell that totally fucking rad winged Kaiju you never see in the trailers.

Brief aside: Kudos to Pacific Rim for not selling out one of its greater moments in trailers. Man of Steel ruined its only memorable moment (Super-Guy flies) in almost every one of its trailers.

Pacific Rim is a mediocre movie at best, and somewhat of a letdown. But at least I can think back two weeks later and get a chubby from some happenings.

Caff, you say. They’re summer movies. They aren’t fine art. Just accept them for what they are!

IV: Summer movies should be more than middling efforts

There is a certain kind of dangerous defeatism in accepting summer movies as banal piles of shit. To not speak of the larger threats at us staring at Idiot Boxes and going numb, at their highest level summer movies (or if you want, blockbusters of any season) can inspire and titillate. Let us not forget the coupe de grace of summer flicks. A New Hope. Now clearly the movie is exceptional. As in it defies the quality of roughly every movie ever. (I don’t believe that, I’m sorry, I promised no hyperbole.)

I’m not arguing that we should dismiss every movie that doesn’t compete with A New Hope. Rather I’m arguing that the blockbuster is a valid medium for inspiration, political commentary (Hi!, The Dark Knight), beauty, and wonder.

I refuse to believe that two-hours of unmemorable, indistinct bullshit with gray hues and explosions is all I should expect out of a blockbuster. When I begin to do that, the doors to mediocrity open. I’ve been told by Johnny Hotsauce (a man smarter and more articulate than me for sure) that I shouldn’t expect more than a fun summer movie out of Episode VII. I just can’t do that, even if it is the most sensible approach. And it certainly is the most sensible.

I’m not even saying that I’m not entertained by dreck. I most certainly am. But when it comes time to analyze that dreck, and it begins to vaporize before my fat-headed, truthfully unremarkable set of eyes, then I’m going to be hard-pressed to accept it. I expect more out of Abrams, and Del Toro. Notice I didn’t mention Snyder, shame on me for being fooled by that fucking idiot.

If you disagree – if you think their latest fare are wondrous bestowments on cinema full of memorable scenes – then I’m glad and I wish I shared your rose-tinted goggles.

To ninja from a hero of mine, I’d rather be a constantly disappointed optimist than casually accept slop and write it off as summer movie fare. I’ve been inspired too many times, had my world glow just a little bit brighter too many times by summer movies to not have expectations from them. Especially from creators I admire and respect.

V. So there you go

So that’s where I stand. I hope it is at least appreciable (I was savaged in that Abrams Opinions Vary, holy fuck) even if you don’t agree with me. This lot of summer flicks hasn’t left me with anything to hold onto. They’ve been entertaining, fast-burning unmemorable flicks. And at least for me, and from creators I respect, I demand more. ‘Cause I know the power of a Binary Sunset, or the moment where the Avengers assemble, or John Blake finding the Bat Cave. And them shits, them shits powerful.