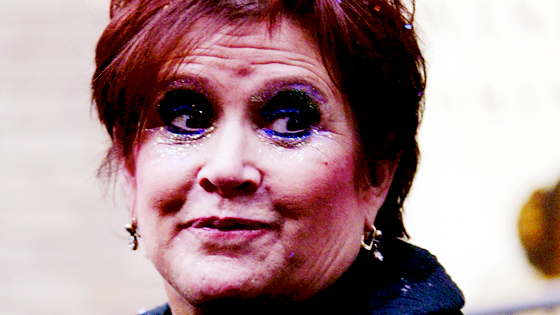 We’ve heard word that Harrison Ford will return as Han Solo in the upcoming Star Wars: Episode VII, but that wouldn’t be quite the same without his partner Princess Leia. There’s good news, though — it looks like Carrie Fisher has told Palm Beach Illustrated that she will indeed reprise the role of Luke Skywalker’s sister. When asked what kind of part she envisaged the character playing in the new movie, Fisher said:

“Elderly. She’s in an intergalactic old folks’ home [laughs]. I just think she would be just like she was before, only slower and less inclined to be up for the big battle.”

Star Wars: Episode VII will be directed by J.J. Abrams and is pegged for a 2015 release, though that’s not a certainty. With Fisher’s apparent revelation the latest indication of an original cast reunion, we’ll be watching for news of a possible return for Mark Hamill — last month he expressed interest in the project to Entertainment Tonight.

Update: A representative for Fisher has played down the interview given to Palm Beach Illustrated, telling CNN that “nothing has been announced” and that the actress was “joking.” As Slashfilm notes, however, it’s not the first time Fisher has seemingly confirmed her involvement in the Episode VII project only to retract. And with the representative stopping short of issuing a full denial, we’re not ruling anything out for now.