NASA’s CURIOSITY rover makes it safely onto Mars. Everyone drink! 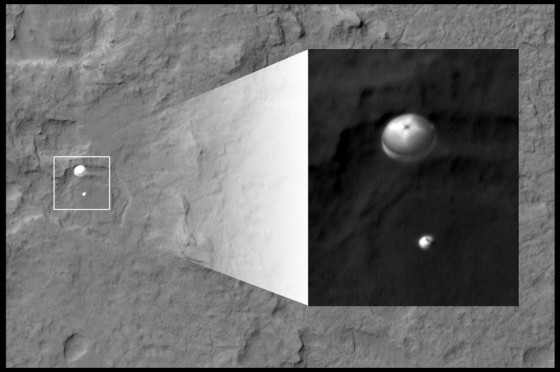 I know this is late news in the wunder-deluge that is the internet churn cycle, but fuck it I want to celebrate. NASA’s Curiosity rover has touched down safely on the Red Planet. Fuck yes.

NASA has done it. The largest and most sophisticated spacecraft ever sent to another planet has landed safely on the surface of Mars. We live-blogged Curiosity’s arrival, but for those of you who couldn’t watch it live, here’s what we saw during the most remarkable Mars landing in history.

That’s not exaggeration, by the way. Curiosity’s arrival was epic, and — by pretty much all accounts — flawless.

In the days and hours leading up to the landing, the rover was described as being in excellent shape. Last night, at 21:12 PT, a little more than an hour before entering Mars’ atmosphere, the uplink transmitter between Curiosity and NASA’s Jet Propulsion Lab in Pasadena was intentionally switched off. The crew at JPL had guided Curiosity along its journey for as long as it could, but given that it takes light 14 minutes to make the trip from Earth to Mars, controlling the spacecraft directly from Earth was out of the question; Curiosity had been programmed to perform all of its entry, descent and landing maneuvers autonomously. Having no input from JPL meant that If the rover was going to land safely, it was going to have to do so entirely on its own.