‘MAN OF STEEL’ FOOTAGE and NEW POSTER Debut at Comic-Con. Check them out right hurr. 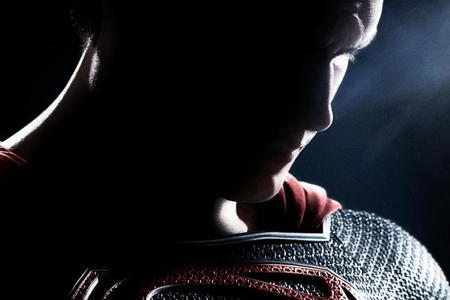 Man of Steel footage dropped. Here’s some collated reactions, plus a new poster.

The first footage ever from Zack Snyder‘s Man of Steel premiered Saturday evening during the Warner Bros./Legendary panel in Hall H at San Diego Comic-Con 2012. It did not disappoint. The film looks to be about a young man’s struggle with the inevitably of his superhero destiny and, in the footage, we saw tons of curious images. There are a few shots of Clark visiting Krypton (or somewhere; Russell Crowe was there), there’s a massive battle with Superman (Henry Cavill) and Michael Shannon‘s villain flying at each other vertically beside a building, some kind of force that throws Superman into the above vault, Lois Lane kissing Superman, the military keeping watch on Superman, a young Clark saving a bus full of kids and much more.

A shorter teaser trailer will be attached to The Dark Knight Rises later this week and we’ll have much more on the footage soon. However, a new teaser poster was revealed, Snyder was asked a few pointed questions about the villain and whether or not this film will link to a Justice League movie. Read more after the jump.

On the subject of the villain, one person asked Snyder straight up who the character was. He said watch the footage again so we did. In the footage we clearly see Michael Shannon’s visage with what almost seems like an exo-skeleton around him followed by the aforementioned flying shot. Later, someone matter of factly asked if Zod was going to be relatable in the movie, referencing an earlier quote by Snyder saying his film would make Superman feel more personable and relatable. He responded by saying “Everyone in the film would have to be relatable” followed by a huge smile. It’s cute that he’s still being coy about this.

Later, a fan mentioned the success of the Marvel movie and asked if this Superman would ever be in a Justice League movie. Synder’s response:

We know Superman is the jewel in the DC crown. We want to get his house in order and then? Who knows what’s possible.

The overwhelming thing we took away from this special Comic Con trailer was that this is a more alienated Superman — someone who has felt different all his life, and is rebelling against society. Also, the few glimpses of Kryptonian tech we saw in the movie were grungy and sort of squidlike — almost as if Snyder was trying to make up for leaving a squid out of a certain other movie.

The first part of the trailer consisted of scenes of Clark Kent’s childhood, intercut with the grown-up Kent walking around a snowy landscape like Alaska or someplace. The childhood glimpses included blades of grass with the Kent farmhouse in the distance, and then a rusty toy wagon on its side, a toy butterfly, and a swingset. Then a little kid wearing a red towel as a cape and running in a field with laundry hanging. There are lots of shots of laundry.

A voiceover says: “What if a child dreamed of being something other than what society intended? What if a child aspired to be something great?” We see the older bearded Clark, looking alienated, as he works at a fishery in the middle of nowhere, struggling with his identity.

And then there is a glimpse of a sequence when Clark is a little kid, and a schoolbus crashes into a river, falling in slow-mo. And then water is flooding inside the bus, and the kids are drowning. And Clark somehow swims up to the emergency door and saves the kids using his superpowers. A woman says in a voiceover, “My son was in the bus. He saw what Clark did.”

Kevin Costner, playing Pa Kent, says “People are afraid of what they don’t understand.” He takes young Clark into the Kent barn with a flashlight. There is a weird dark shape in there, full of tubes and ridges — and like we said, it looks squidlike, or whale-like. “It’s not from this world, Clark, and neither are you,” says Pa Kent. He hands Clark a small object, like a signet ring, with the “S” shield on it.

And something squid-like lifts up into the air, a small item, levitating.

We see the older bearded Clark saying, “All these questions, like where do I come from.” He looks positively grief-stricken and miserable.

Then we hear Pa Kent again: “It was left to you to decide what kind of man you want to be, Clark. Whatever that man is, good or bad, he’s going to change the world.” ”

And during this, Clark is going into a space in the middle of the tundra — and maybe it’s the Fortress? He’s wearing The Suit and looking pensive. He closes his eyes for a moment. And then he opens them — and rockets skywards, leaving a little Jetstream behind him. He soars over the clouds like a bullet, and it looks frankly incredible. The flying in this movie looks like nothing we’ve seen in a superhero movie.

And then there is some weird action with cars and trucks being lifted upwards as if by an anti-gravity ray.

We see a grief-stricken Jor-El (Russell Crowe), exposing the S-Shield on his chest, as if revealing a secret.

And then Clark is in a series of horrible situations — he’s being buried in rocks and shouting “NO!” He’s on fire and apparently stark naked. He’s thrown through the air and through the wall of a building, landing next to a bank vault (as in the photo we’ve seen.) He’s handcuffed, wearing the Superman costume, and being led away by guards. And there’s just a glimpse of General Zod, the movie’s villain, scowling.

Oh, and Clark is holding a baby protectively, in the middle of a nightmare battle. And we also see Clark kissing Lois, and an explosion on the side of a building, as Metropolis gets trashed. There are also shots of CG blue flames going everywhere.

And Clark says, in a voiceover: “My father believed, if the world found out who I really was, they would reject me out of fear. He was convinced the world wasn’t ready. What do you think?” And we see Clark walking into the Daily Planet office, past the famous globe and logo, and putting on the glasses.

There are soldiers raising machine guns to Superman — and Superman walks towards them, fearlessly. Smash to the “S” shield. 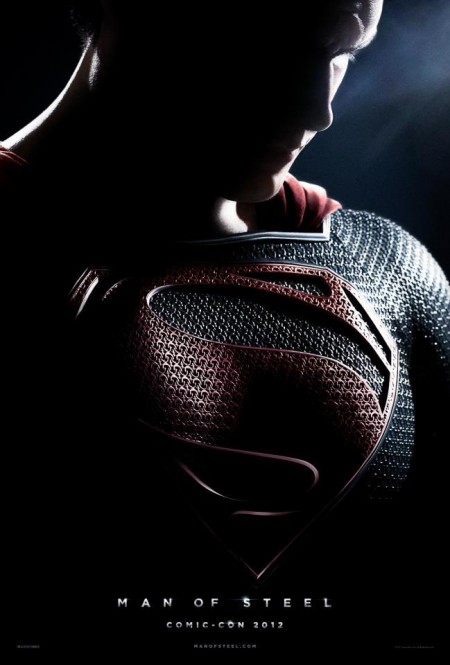