Archives
« ‘FANTASTIC FOUR’ REBOOT Being Penned By Jeremy Slater. I Am Not Familiar.
‘MAN OF STEEL’ FOOTAGE and NEW POSTER Debut at Comic-Con. Check them out right hurr. »

‘THE LAST OF US’ VIDEO: Meet Bill, Another (Cranky F**king) Survivor 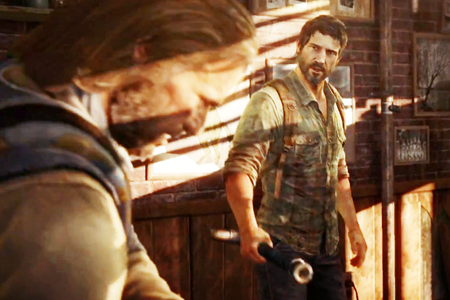 The Last of Us, won’t you allow me into you? You are so far away. For now I will sate myself on glorious videos, such as this one containing the newest survivor to be revealed.

Bill is a new character in The Last of Us, set as a supporting actor in Joel and Ellie’s main storyline, Naughty Dog announced at its San Diego Comic-Con panel. The first look at Bill, who is portrayed via performance capture by William Earl Brown, shows him as a crotchety, tough old man with a safe house that Ellie and Joel break into, apparently setting off all kinds of booby traps along the way.

The introductory cinematic cutscene suggests Joel and Bill have a history, and as is expected for the game, it’s not a relationship based mainly on four-letter words and raised voices. The scene sets Joel and Ellie up to scavenge around the town for parts so Bill can build a car for the main duo’s escape.

We assume that earlier in his life, Bill helped another group of lost souls survive a zombie apocalypse. He’s surprisingly nice for a mean old man.

Tags: do need, do want, Gimme Gimme, Naughty Dog, Playstation, PS3, SDCC, The Last of Us, the last of us video, w earl brown