Archives
« ‘Ted Lasso’ Season 2 is going to have two more episodes than the first. This feels very, very good.
‘The Mandalorian’ star Pedro Pascal cast as Joel in ‘The Last Of Us’ HBO TV series. Hell yeah, this is the way, blah blah! » 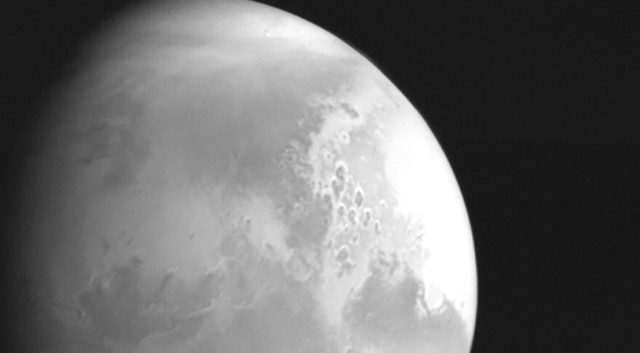 China’s Tianwen-1 has successfully entered orbit around Mars, motherfuckers! As I always say: I know China is problematic as fuck. But if we’re only rooting for space missions tethered to non-problematic countries or companies, we’re never going to be rooting. So fuck yes. I’m stoked.

Tianwen-1 initiated a near 15-minute burn of its 3000N main engine at 6:52 a.m. Eastern allowing the five-ton spacecraft to slow down and be gravitationally captured by Mars.

The Mars orbit insertion maneuver was designed to place the Tianwen-1 into an elliptical orbit of 400 by 180,000 kilometers inclined by 10 degrees, with an orbital period of 10 days.

With Mars more than 192 million kilometers away from Earth and a light time delay of 10 minutes and 40 seconds, the braking burn was by necessity pre-programmed. Intervention would not be possible in the event of an issue.

Tianwen-1 will gradually lower its orbit to allow for observations of Mars. It will also begin preparations for the entry, descent and landing attempt of a 240-kilogram solar powered rover, an event expected to take place around May or June, according to the China Aerospace Science and Technology Corp.

The orbiter is expected to approach as close as 265 kilometers to the surface, allowing a high-resolution camera to return images with a resolution of better than 0.50 meters per pixel.

This capability will be used to map a targeted rover landing site in Utopia Planitia. Landing coordinates of 110.318 degrees east longitude and 24.748 degrees north latitude had previously appeared in an official Chinese space publication before being removed.

Soviet, Japanese and U.S. spacecraft have previously failed at the orbital insertion stage of the mission. The Soviet Mars 4 mission was unable to fire its engines and thus continued past Mars, while NASA’s Mars Climate Orbiter in 1999 approached too close, resulting in a mission-ending interaction with the Martian atmosphere.

Tianwen-1 is designed to collect an array of diverse data, both from orbit and on the Martian surface.

Long Xiao, a planetary scientist at the China University of Geosciences, told SpaceNews that Tianwen-1 equipped with a total 13 scientific payloads in to study Martian morphology and topography, study surface regolith and search for water ice with radars, study the composition of surface materials and the characteristics of the ionosphere, climate, environment and magnetic field.

“The most unique aim is to search and map the distribution of water ice on the surface and subsurface,” says Long. Two sounding radars will operate independently, with one onboard the orbiter. It will conduct a global survey but focus more on polar high latitude regions. The other is on the rover. “As radar data processing and interpretation is very complex, so the ground and satellite radar data together could provide more reliable results than a single one,” says Long.

Zhang Xiaoping, an associate professor at Macau University of Science and Technology, likewise highlighted the potential of the radar payloads.

“We want to use the radar system to measure the subsurface structure of the Martian surface, especially for the buried water ice. This would allow us to study not only the underlying geologic structures of Mars, but also the potential source of water ice that supplies long-term human stay,” Zhang told SpaceNews.

“It is also important to measure the thickness and layers of ice and carbon dioxide in the polar region, to understand the seasonal atmosphere evolutions of Mars. By combining orbital and ground penetrating radar results, we will have a better understanding of the soil structure and evolution in the landing site.”

Tianwen-1 launched from Wenchang, south China, July 23, 2020 on a Long March 5 heavy-lift rocket. The new launcher had crucially returned to flight in December 2019, having been grounded for more than 900 days following a 2017 failure.

The spacecraft carried out four trajectory correction maneuvers to refine its orbit and a larger deep space maneuver to alter its orbital inclination.

The European Space Agency provided China with support for the Launch and Early Orbit phase (LEOP)  and later during Earth-Mars transfer with very precise tracking via Delta-DOR (delta Differential One way Range) measurements campaigns. This was carried out with ESA deep space 35-meter-diameter antennas located in Cebreros, Spain and New Norcia, Western Australia.

The mission draws on technologies and capabilities developed through the Chang’e lunar program orbiters, lander and rovers, as well as head shielding and parachute expertise from Shenzhou human spaceflight endeavors

China is also developing a Mars sample return mission for around 2028-30.