Archives
« Rumor: Matt Reeves’s ‘The Batman’ is based on classic ‘Year One’ story. I’m fucking here for this, dudes
‘Altered Carbon’ gets renewed for second season with Anthony Mackie starring. Can’t get any worse than the first, right? » 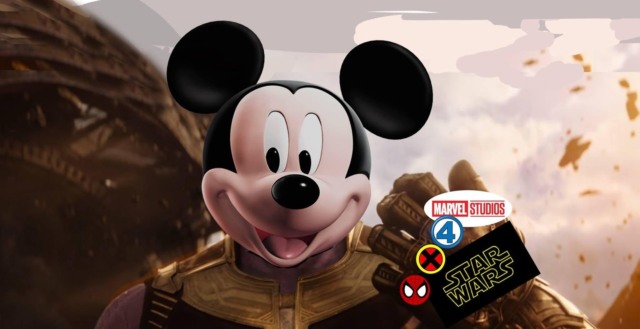 Well, you fucking nerds. You’ve, nah, we’ve gotten our wish. Disney is about to absorb all of Fox’s Marvel properties into its bulging, straining corpus.

Charging headlong into a world where a small number of corporations own the vast majority of ideas in perpetuity alongside a small number of wealthy individuals owning the majority of the world’s wealth, Fox shareholders approved the merger agreement which includes a $71.3 billion offer from Disney to take over most of 21st Century Fox’s assets, Disney announced in a press release today. Additionally, according to the release, Disney stockholders approved the transfer of stock to Fox shareholders.

“Combining the 21CF businesses with Disney and establishing new ‘Fox’ will unlock significant value for our shareholders,” said Rupert Murdoch, Executive Chairman, 21st Century Fox and probably a lizard person. “We are grateful to our shareholders for approving this transaction. I want to thank all of our executives and colleagues for their enormous contributions in building 21st Century Fox over the past decades. With their help, we expect the enlarged Disney and new ‘Fox’ companies will be pre-eminent in the entertainment and media industries.”

“We’re incredibly pleased that shareholders of both companies have granted approval for us to move forward, and are confident in our ability to create significant long-term value through this acquisition of Fox’s premier assets,” said Robert A. Iger, Chairman and Chief Executive Officer, The Walt Disney Company and probably the future President of the United States of America, provided we still have people as presidents ten years from now and not companies, and provided the Earth hasn’t been annihilated in a nuclear apocalypse. “We remain grateful to Rupert Murdoch and to the rest of the 21st Century Fox board for entrusting us with the future of these extraordinary businesses, and look forward to welcoming 21st Century Fox’s stellar talent to Disney and ultimately integrating our businesses to provide consumers around the world with more appealing content and entertainment options.”

Of course, by providing consumers with “more” content and options, what Iger actually means is less, since Disney will now control almost half of the annual box office. Generally, when there is less competition, it results in less options, but Disney is adept at breaking with convention. After all, just look at how they managed to essentially end the concept of “public domain.”

“Mean Gene, the first thing you need to do is to tell these people to shut up if you wanna hear what I’ve got to say,” Iger continued, though it was cut from the official press release. “The first thing you’ve gotta realize, brother, is this right here is the future of entertainment. You can call this the new world order of entertainment, brother.”