Archives
« Nintendo has sold 9.2 million Wii U units since 2012
Watch: Proof that Kool-Aid Man can run through a f**kin’ wall »

‘Age of Ultron’ Non-News: The Vision to appear in other MCU movies 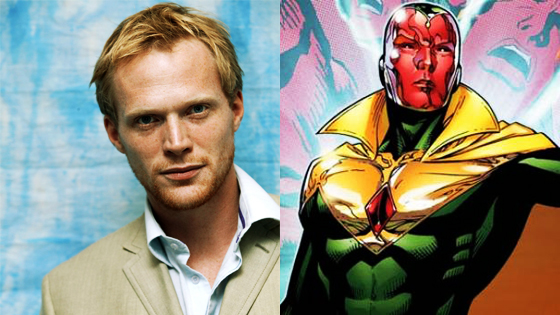 Gasp! The Vision will be in more movies than just Avengers: Age of Ultron. Hey, whatever. It’s non-news. It’s right there in the fucking title. But for those of us at home, covered in slop, covered in snow, covered in Chez-It crumbs, covered in self-hate, covered in Bucky Barnes homemade pajamas, it’s worth something. Something obvious, but still.

One of the closest guarded secrets in Joss Whedon‘s Avengers: Age of Ultron is the role of Vision. We know Paul Bettany is playing the character, that his playing the character is a link back to Tony Stark’s personal assistant J.A.R.V.I.S. and that Vision’s creation is somehow linked to Ultron, the artificially intelligent villain of the film. Traditionally the character has some pretty impressive powers but the extent we’ll see those play out in the film, his allegiances, origins and more, are nothing more than educated guesses at the moment.

Now, a new piece of information regarding Vision has been revealed. Bettany hinted in a new interview that he and the character are already planning to return for another Marvel movie. Read the Paul Bettany Vision quotes below.

Bettany was talking to News Australia (via Superhero Hype) about Vision and said the following:

That’s the really great thing about the Marvel gig for me. I have never known if I have had a job six months out ever in my life. And now I know that they have plans and I can be even more judicious about the stuff that I do outside of that work. I can wait for the right thing and feel really attached to it.

Obviously he doesn’t explicitly say he’s coming back, but saying he knows he has another job six months out and “they have plans” definitely hints at it.

On The Vision Tip: I dig how they haven’t showcased him in any spots, yet. Rendar and myself have speculated that there’s a lot more to AoU than Marvel, Whedon, and the Marketing Czars are letting on. Which is fucking perfect to me.