NASA almost got its new MARS-LANDING TECHNOLOGY ready for test 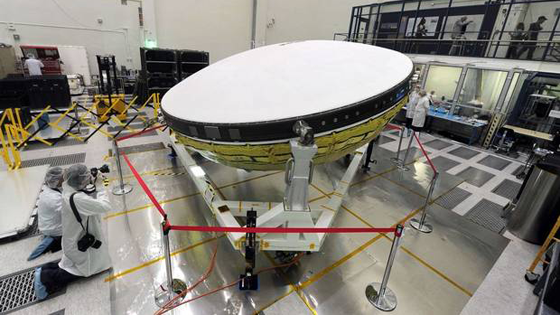 Yes, NASA! Yes! Hurry up with your wunder-technologies. I need to get off this fucking Blue Marble. I got a list of debts a mile long, a warrant in my name, and a boyfriend with genital warts who isn’t particularly happy about me. And a fiance and she ain’t happy about me having that wart-covered boyfriend neither!

Reporters got their first look at the rocket-powered, flying saucer-shaped vehicle that will be sent into near space this June to test the Low-Density Supersonic Decelerator (LDSD) that will land future spacecraft on Mars.

Current technology for decelerating from the high speed of atmospheric entry still uses the basic Viking parachute design that put two landers on the Red Planet in 1976 — and, more recently, the one-ton Curiosity rover in 2012.

But this technology won’t be sufficient for future NASA craft, which will be hauling larger payloads to accommodate extended stays on the Martian surface. NASA still plans to use atmospheric drag rather than rockets to slow the lander in order to save fuel. To accomplish this, the LDSD uses both a giant supersonic parachute — twice the size of Curiosity’s — and a balloon-like device that rapidly inflates to increase surface area, which adds air resistance.

The folks over at JPL’s Low Density Supersonic Decelerator project have been building a rocket sled — and here it is in action! Read…

Previous tests of the LDSD were conductedwith a rocket sled. Later this month, the test vehicle will be sent to the U.S. Navy’s Pacific Missile Range Facility on the Hawaiian island of Kauai. In June, a combination of high-altitude balloons and rockets will lift the LDSD to a height of 34 miles above the Pacific Ocean, where the air will be thin enough to simulate Mars’ atmosphere. It will then drop to Earth, with the objective of slowing its descent from a speed of Mach 3.5 to lower than Mach 2, before it splashes into the water.

UFO enthusiasts will finally have a chance to see a flying saucer land on Earth. [io9]