Archives
« Guys behind ‘LEGO MOVIE’ may direct ‘GHOSTBUSTERS 3’.
‘PACIFIC RIM 2’ still a possibility. Thar be a Kaiju in me pants. Roaring. »

SOLAR STORM in 2012 nearly FRIED ALL OUR ELECTRONICS. Bow before SOL. 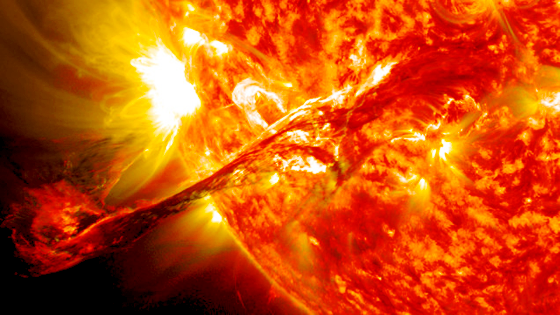 It’s only a matter of time before the sun deploys a gnarly solar storm that knocks down our electrical grids. Fries our cell phones. Reduces us to chimps with boner pills and botox. Said time was almost two years ago, but we got lucky like a mofuckah’.

A massive solar storm in July 2012 was more intense than thought—and it blasted right through the Earth’s orbit. Luckily for us, we were on the other side of the sun, thus missing the chaos completely. But if that storm had hit this beautiful little blue marble in space? “The solar bursts would have enveloped Earth in magnetic fireworks matching the largest magnetic storm ever reported on Earth, the so-called Carrington event of 1859,” Science Daily reports.

These “fireworks” could have knocked out our electrical grid and satellites, leaving us in global darkness without telecommunications or GPS, potentially for years.

New research published yesterday in Nature Communications suggests that we “dodged a huge magnetic bullet” two summers ago. While a “solar superstorm” is a fortunately rare event, being hit by one could upend almost every detail of our existing electromagnetic infrastructure. The 1859 solar storm, for example, not only knocked out the telegraph networks of the day, it even gave electric shocks to the system’s human operators; and, as Science Daily reminds us, “A considerably smaller event on March 13, 1989, led to the collapse of Canada’s Hydro-Quebec power grid and a resulting loss of electricity to six million people for up to nine hours.”

Due to the severity of these events, it’s obviously absurd to be distracted by the potential beauty of the storm itself—nonetheless, it seems that, if this ever does happen, it will be an absolutely extraordinary way to be plunged into global darkness.

Described as “gnarly, twisty ropes of magnetic field” energy, these coiled branches of solar magnetism would have “tangled” with our own as they enveloped the planet. Incredibly, this particular storm was even oriented such that it would have augmented, not canceled, our own magnetic field: “One reason the event was potentially so dangerous, aside from its high speed, is that it produced a very long-duration, southward-oriented magnetic field, [UC Berkeley research physicist Janet G. Luhmann] said. This orientation drives the largest magnetic storms when they hit Earth because the southward field merges violently with Earth’s northward field in a process called reconnection. Storms that normally might dump their energy only at the poles instead dump it into the radiation belts, ionosphere and upper atmosphere and create auroras down to the tropics.” [Gizmodo]