Archives
« Cosplay: World SADDEST SUPERHEROES are like, a bummer man.
The MOON has volcanoes and craters mixing it up. Get along, all ready! » 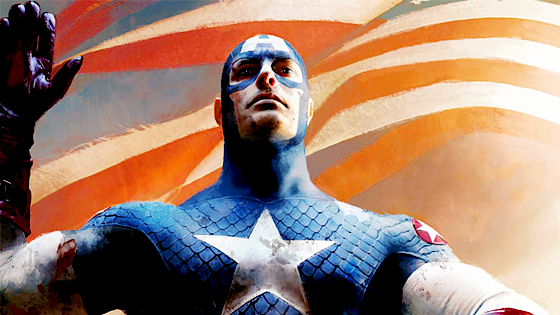 I love me some Sam Humphries. I love me some Ultimately Ultimate Ultimate Squad. I don’t know if I’m going to love them pitching Captain America as president to be, but I’m willing to give it a try. For Sammy. And his gorgeous afro. Plus his writing skills, there are always those. And the idea that the Ultimate universe plays for keeps, nephew! For keeps! I’m just rambling now.

In Marvel Comics’ Ultimate Universe death is permanent and events can have unintended and long lasting consequences. A prime example of that is the death of Peter Parker, the Ultimate U’s first Spider-Man, who died saving the life of Captain America. Cap felt responsible for Peter’s death and decided to give up his heroic identity at precisely the moment when some would say his country needed him the most, at a time when a high-tech terrorist attack in Washington DC and a brutal uprising by anti-mutant extremists in the Southwest have fractured America as part of the “Divided We Fall” event.

Fortunately, America’s greatest hero saw what was happening to the land he loved and picked up his shield again, but the damage was already done. If Captain America is going to save the U.S.A. he will have to do more than just embody its core ideals — he’ll have to personally lead it back from the brink of destruction. Starting with “Ultimate Comics Ultimates” #15, on sale September 19th, Cap’s heroics lead to him winning a special election for President of the United States. CBR News spoke with with writer Sam Humphries, editor Mark Paniccia, and Marvel Editor-in-Chief Axel Alonso about the story line.

The idea to elect Steve Rogers to America’s highest office came about when the writing reigns of “Ultimate Comics Ultimates” was shifting from former writer Jonathan Hickman to current scribe Sam Humphries. “Jonathan had a fantastic run and did an amazing job of setting up all these factors that pressured America from the outside and destabilized it from the inside. The last page of his final issue showed an antimatter bomb vaporizing half of Washington DC, and most of the elected officials. I took that as a challenge from him. It was like, ‘Bye. Good luck with the book. Let’s see what you can do,'” Sam Humphries told CBR News with a laugh. “When you come on a book with that kind of set up, especially if it’s a book like ‘Ultimates’ where we can’t sweep things under the carpet, there has to be some lasting consequences. The first page of my first issue couldn’t be Thor helping to rebuild the capital building and everyone going, ‘That was sad, but now we’re back.’

“So when Jonathan and I first started working together he sent me all of his notes on the book. He was very generous with all his ideas. He said, ‘Here’s what I have planned. You can take some of it or you can ignore it all.’ Buried within his notes was this idea that he had to make Cap president. He thought it would be cool, but knew it was a controversial idea that I maybe didn’t want to pitch right out of the gate,” Humphries continued. “The longer I planned the series and the longer I was developing these outlines and plans for my first year it was clear to me that this was the best thing we could do coming out of Jonathan’s run. So I decided I would at least pitch this story.”