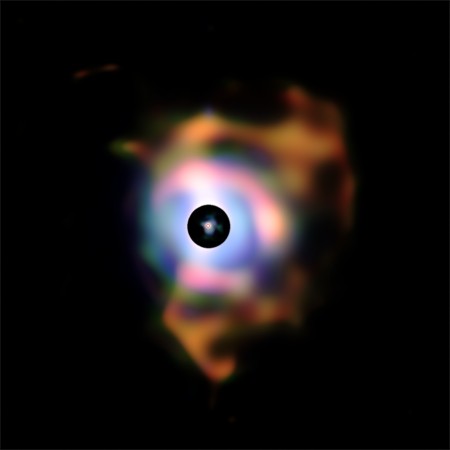 That red outlined spec in the middle of that picture is Betelgeuse. The roaring, rumbling, amorphous sexily shaded cloud surrounding it is an enormous nebula of dust.

An expansive nebula of dust is seen to surround red supergiant star Betegeuse in this remarkable high resolution composite, an infrared VLT image from the European Southern Observatory. Betelgeuse itself is outlined by the small, central red circle. If found in our own solar system its diameter would almost encompass the orbit of Jupiter. But the larger envelope of circumstellar dust extends some 60 billion kilometers into space, equivalent to about 400 times the Earth-Sun distance. The dust is likely formed as the swollen atmosphere of the supergiant sheds material into space, a final phase in the evolution of a massive star. Mixing with the interstellar medium, the dust could ultimately form rocky terrestrial planets like Earth. The central bright portion of the outer image has been masked to reveal fainter extended structures. The field of view is 5.63 arcseconds across.

Stellar equivalent or stretch marks or some shit. Mine aren’t nearly as sexy.