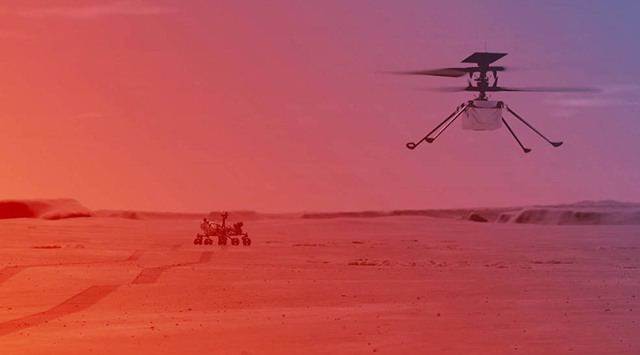 Wait, hold the fuck on! NASA is planning a goddamn helicopter flight? On fucking Mars? My glistening nips, is this ever fucking cool. Today, the Space-Wizards revealed their plans for said flight, and goddamn let’s go fellas!

So far, human exploration on Mars has been measured in the circular motion of orbiters above the planet and the meandering trails of rovers on the ground below. Early next month, NASA will enter the elusive space between those two realms, with the launch of the box-shaped helicopter Ingenuity.

Equipped with two 2,400 rpm rotors (one placed on top of the other), solar-powered lithium batteries, and four carbon composite legs, Ingenuity is slated to conduct humanity’s first powered and controlled test flight on another planet. Now, the NASA team operating Ingenuity have figured out the area in which the $80 million helicopter will take to the Martian skies: an oblong, 300-foot zone in the immediate vicinity of the Perseverance rover, which landed on Mars last month.

“The Perseverance rover carries with it the most advanced suite of science instruments we’ve ever sent to Mars,” said Lori Glaze, director of NASA’s Planetary Science Division, in a press conference today. In addition to the rover’s research equipment, it brought a special side project: the Mars chopper.

Like a baby bat clinging to its airborne parent, Ingenuity arrived to Jezero Crater strapped to Perseverance’s belly. The helicopter has yet to be deployed, still nestled in the security of the rover’s power supply. But once it splits off, the craft’s plan is short and sweet: to take off and hover, and, if the team is fortunate, do so several more times. Each hover is planned to last 20 to 30 seconds.

Though much of Mars is blissfully flat, including the stretch of ancient lake bed where Perseverance landed, there would be huge benefits to traversing the planet by air. NASA scientists hope that the helicopter charts a path forward for more advanced Martian craft in the future and that it can inform flight missions elsewhere, like the planned travails of Dragonfly on the moon Titan.

Once Ingenuity separates from Perseverance, the rover will hustle out of the area to ensure the experimental helicopter doesn’t get shaded before the Martian sunrise. (It will only have enough power left from its umbilical-like connection to the rover to last one Mars night without solar power, so it’s important that it has free access to sunlight the next day.) Perseverance will head over to the newly named Van Zyl Overlook some 200 feet from the helicopter’s drop site to observe the smaller craft’s achievement. The overlook is not monumental; about 3 feet higher than the flight zone, but high enough for a good view.

Having been tested in simulated Martian atmospheres on Earth (think a vacuum-sealed grain silo), the helicopter is currently scheduled to try the real thing no earlier than April 8, according to Bob Balaram, the chief engineer for Ingenuity. Because it uses off-the-shelf components that help the helicopter navigate in the thin Martian air and convey information back to Perseverance, Ingenuity is truly a computational genius when compared to its fore-bearers.

“The particular computer we’re using here on Ingenuity is about 150 times faster than the one on Perseverance,” Balaram said in a NASA press conference today. “If you add up all the computers all the way back that have flown out into the solar system and you sum it all up, we dwarf it by two orders of magnitude.”

Despite that fact, Ingenuity is still an interplanetary demo, which means the mini chopper has only a brief period of operation. It’ll have an Earth month to test its wings—erm, rotors—and could fly up to five times. The NASA team wouldn’t comment on whether the later flights might be more ambitious than the first, brief test.

Not a group to shirk an opportunity for symbolism, NASA fastened a piece of fabric about the size of a postage stamp underneath the helicopter’s solar panel. It’s cloth cut from one of the Wright brothers’ first powered, controlled-flight aircrafts, flown at Kitty Hawk nearly 120 years ago. The brothers auctioned off sheathes of the fabric to get funds for future flight attempts, and buyers of one of those fragments provided it to the Mars 2020 team. It is an extremely fitting story arc that the cloth should now find itself flying once more, a literal world away.