Cary Fukunaga directing movie adaptation of cyberpunk comic ‘Tokyo Ghost’ and why haven’t I heard of this fucking comic? 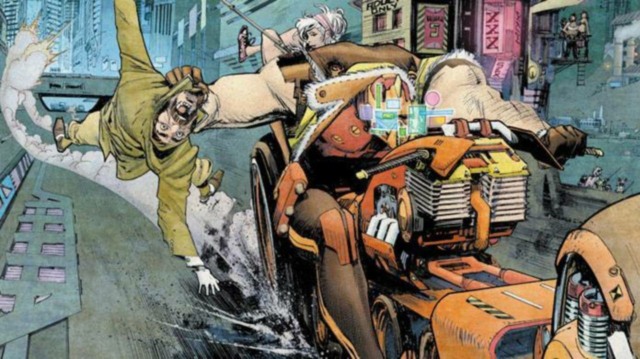 Cary Fukunaga is ready to move on from the U.K. to Tokyo. The No Time to Die director, whose long-delayed film will finally hit theaters this October (probably), has signed on for his next project, a feature adaptation of the cyberpunk Image comic series Tokyo Ghost for Legendary.

According to The Hollywood Reporter, Cary Fukunaga has been tapped by Legendary to direct a feature adaptation of Tokyo Ghost, based on the Image comic series of the same name from writer Rick Remender, who will write the screenplay for the feature.

Written by Remender, drawn by Sean Murphy and colored by Matt Hollingsworth, Tokyo Ghost is set in the year 2089, in a gangster-run world where humanity has become addicted to technology as an escape from reality. Peacekeepers Debbie Decay and Led Dent are given a job that takes them to the last tech-free country on Earth: Tokyo.

Here is the synopsis for the Tokyo Ghost comic:

The Isles of Los Angles 2089 – Humanity is addicted to technology. Getting a virtual buzz is the only thing left to live for, and gangsters run it all. And who do these gangsters turn to when they need their rule enforced? Constables Led Dent and Debbie Decay are about to be given a job that will force them out of the familiar squalor of LA and into the last tech-less country on Earth: The Garden Nation of Tokyo.

Tokyo Ghost earned all kinds of raves when it hit shelves in 2015, with critics praising its nightmarish cyberpunk vision and sheer imagination. But I can’t be the only one who has become a little tired of cyberpunk at this point, especially when studios and streamers have been mining it more for the aesthetic instead of tapping into the cultural context and technological paranoia that made the genre so ubiquitous in the ’90s. Now, divorced of that cultural meaning, cyberpunk titles like Altered Carbon, Mute, the ill-advised live-action Ghost in the Shell, even Ready Player One to an extent, and others, feel like hollow carbon copies of the classics of the genre (one of the exceptions being the excellent Blade Runner 2049).

But based on the critical acclaim and general love for Tokyo Ghost, perhaps Fukunaga’s feature film adaptation could break the trend. Fukunaga is one of the most singular directors working today, whose Netflix series Maniac tapped into the cyberpunk ethos in a really interesting way, so he might be able to do something really exciting with a full-fledged cyberpunk feature project.

Remender’s titles have become all the rage in Hollywood lately, with his series Fear Agent currently being developed by Seth Rogen’s Point Grey for Amazon. Fukunaga will produce Tokyo Ghost under his Parliament of Owls banner, with Hayden Lautenbach. Jon Silk is also producing for his new production company, Silk Mass.