Archives
« ‘The Batman’ casts John Turturro as Carmine Falcone. My word, this cast!
Xbox’s next console Project Scarlett won’t do VR because “no one’s asking for it” and I respect that shit » 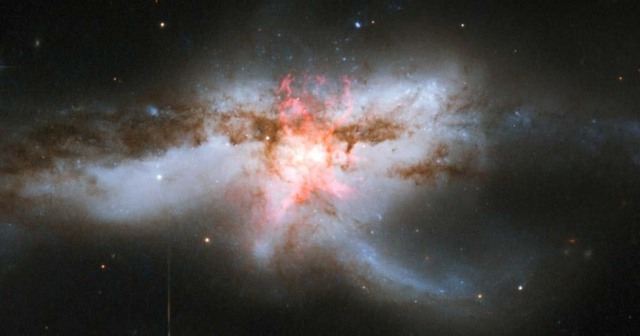 A typical but existentially terrifying feature of almost every galaxy is a monster lurking at its center: A supermassive black hole which can be hundreds or even billions of times the mass of our sun. The supermassive black hole sucks in dust and gas from the surrounding galaxy, leaving an empty spheroid shape right in the middle of the galaxy from which not even light can escape.

Very occasionally, astronomers spot not one but two of these hungry giants moving together, typically when they observe two galaxies merging. But now, researchers have spotted something utterly unprecedented: A galaxy with three supermassive black holes at its heart.

Dr. Peter Weilbacher, one of the researchers from the Leibniz Institute for Astrophysics Potsdam, underlined the significance of this finding: “Up until now, such a concentration of three supermassive black holes had never been discovered in the universe,” he said.

Galaxy NGC 6240 is approximately 400 million light-years away and is fairly well studied, having been imaged by instruments like the Hubble Space Telescope on several occasions. This time, though, the researchers used the Multi Unit Spectroscopic Explorer (MUSE) instrument on the European Southern Observatory’s Very Large Telescope (VLT). This instrument allows the researchers to collect a three-dimensional dataset with each pixel representing a full spectrum of light.