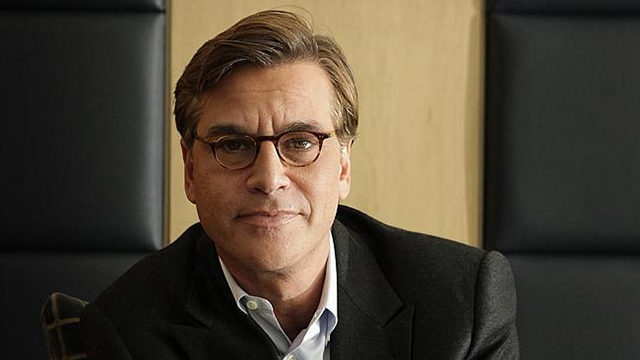 Both Marvel Studios and DC Films are in talks with the master of the walk-and-talk, Aaron Sorkin, about a potential movie. I’m down with this, since as I suffer capes-fatigue, odd, interesting talents like this will be necessary to keep me buzzing about these bombastic bullshit tentpoles.

Can you imagine Bruce Wayne and Diana Prince doing a classic walk and talk through the hallways of Wayne Enterprises? How about Spider-Man and Hawkeye exchanging not just a throwaway line or two, but having an epic back-and-forth conversation full of quotable one-liners? Well, the future is wide open, because Oscar-winning writer Aaron Sorkin (The Social Network, A Few Good Men) says he has meetings scheduled with both Marvel Studios and DC Films to discuss the possibility of writing a superhero movie. But which property would he tackle?

Sorkin broke the news of his upcoming meetings to ComicBook.com:

“I happen to have meetings coming up with both DC and Marvel. I have to go into these meetings and tell them as respectfully as I can that I have never read a comic book. It’s not that I don’t like them, it’s just that I’ve never been exposed to one. So I’m hoping that somewhere in their library is a comic book character that I’m going to love and that I’m going to want to go back and start reading from the first issue on.”