Archives
« DC Comics TV Series Create $1 Billion A Year In Revenue
‘Wonder Woman’ Trailer: I Used To Want To Save The World » 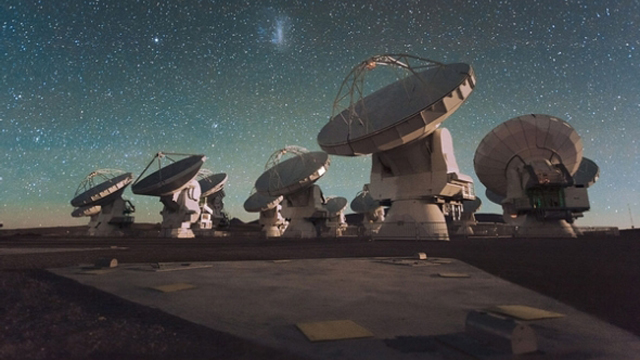 Next year, astronomers are going to attempt to take the first picture of a black hole. Like, ever. Insert all the easy jokes, then pray they pull it off.

Certain scientific breakthroughs always seem to be a few years away. The first direct observation of a black hole has long fallen into this category. Maybe not for much longer: the astronomers of the Event Horizon Telescope have scheduled their first full-on attempt to image the black hole at the center of the Milky Way for next spring.

On two nights in April 2017, eight observatories around the world—including the Atacama Large Millimeter Array (ALMA) and the South Pole Telescope—will simultaneously observe Sagittarius A*, the supermassive black hole at the galactic center. (The EHT will also observe the much larger black hole at the center of the galaxy M87.) Together, these observatories will function as a single Earth-size telescope capable of directly imaging the black hole’s event horizon, the boundary through which anything that passes can never return.

The Event Horizon Telescope is an international collaboration involving high-frequency radio observatories in Europe, North America, South America, and Antarctica. (More background on the project here.) Using a technique called very long baseline interferometry, scientists can mimic the effect of impractically huge telescopes, thereby reaching higher levels of resolution than any other astronomical instrument. The array will be sharp enough to see a DVD on the moon. That’s acute enough to detect the “shadow” Sagittarius A* is thought to cast on the bright emission coming from near the event horizon.

It takes a long time to reduce the data from an experiment like this, so even if the observation goes perfectly, will probably be months before we see a picture. And there is, of course, no guarantee that the observation will go perfectly. But the fact that the experiment is scheduled is a big deal. It hasn’t been easy for these astronomers to get this point.