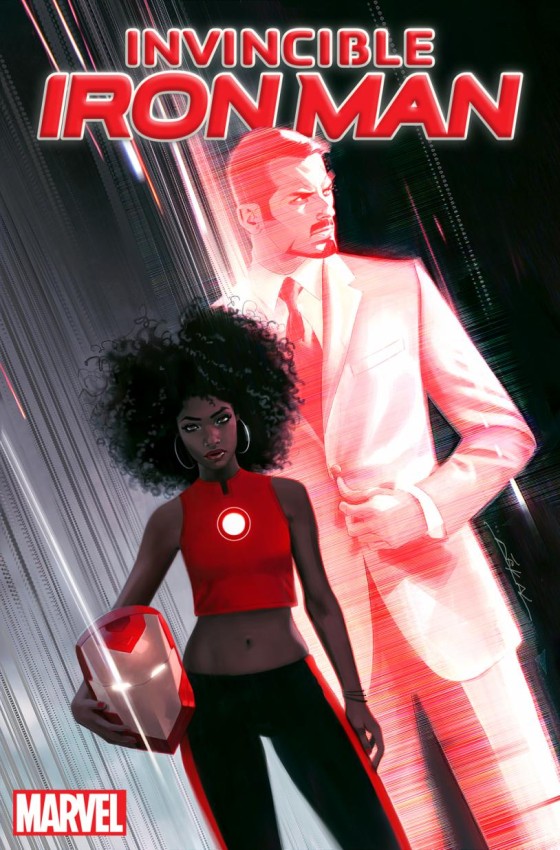 Marvel has announced that the next Iron Man is going to be Riri Williams. I’m not familiar with. But apparently she’s a Stark-level genius African American girl who attends MIT. I can dig it.

Riri Williams, the 15-year-old M.I.T. student introduced in Marvel’sInvincible Iron Man #9 who built her own set of Iron Man armor will be rocking that armor long-term. Marvel announced that, as part of their Marvel NOW! intitiative, they will be relaunching the Invincible Iron Mantitle with a new #1, and with Riri as its new protagonist.

Brian Michael Bendis, who’s currently writing the title, will remain on writing duty for the new series with artist Stefano Caselli joining the team. In the announcement in Time Magazine, Bendis explained what inspired Riri in the first place:

One of the things that stuck with me when I was working in Chicago a couple of years ago on a TV show that didn’t end up airing was the amount of chaos and violence. And this story of this brilliant, young woman whose life was marred by tragedy that could have easily ended her life—just random street violence—and went off to college was very inspiring to me. I thought that was the most modern version of a superhero or superheroine story I had ever heard. And I sat with it for awhile until I had the right character and the right place.

As we’ve been slowly and hopefully very organically adding all these new characters to the Marvel Universe, it just seemed that sort of violence inspiring a young hero to rise up and act, and using her science acumen, her natural born abilities that are still raw but so ahead of where even Tony Stark was at that age, was very exciting to me.

The new Invincible Iron Man #1 will have Tony Stark passing the Iron Man mantle on to Riri after having been made aware of this brilliant girl who reverse engineered his armor in her college dorm room. Bendis says that Tony is “aware that this young woman is flying by him in terms of how quickly she’s doing it. Her brain is maybe a little better than his. She looks at things from a different perspective that makes the armor unique.”

But if you think that you know how the current Civil War II event is going to end because Tony is giving up being Iron Man, Bendis assures us that we really don’t, saying, “[P]eople are going to be upset that they think they know the ending to Civil War II now than anything we just talked about. But I can tell you just because we’re hearing what we’re saying doesn’t know you mean how Civil War II ends. We’re not telling you the end, at all.”

I have to say that I’m really excited for these two characters to meet. As many problems as Tony has, and as much of a douche as he’s capable of being, he always respects brilliance, and he always nurtures and encourages that brilliance however he can. I’m thrilled that there’s gonna be a female 15-year-old prodigy who’s going to be showing him up, and I love that his response to him getting to know her is going to basically beYou’re smarter than me and you create better tech. You should be the one doing the Iron Man thing.

And yes, according to Time, “Iron Man for now. She’s still working on the name.”