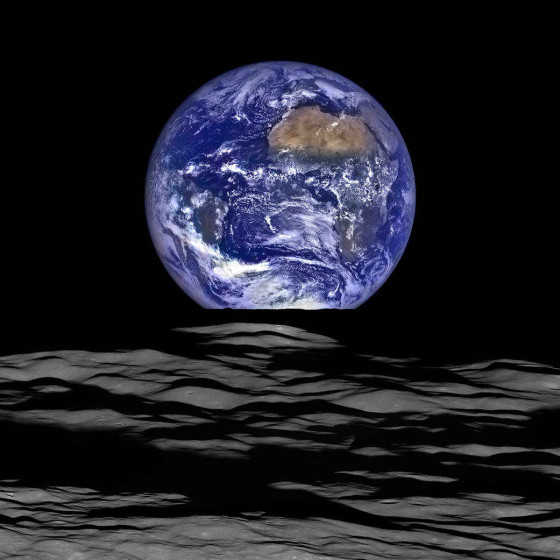 A spectacular new photo of Earth from space recalls the two most famous images of our planet ever taken.

The photo, which was captured by NASA’s robotic Lunar Reconnaissance Orbiter (LRO), shows a sunlit Earth looming above a rumpled moonscape banded with shadow.

“The image is simply stunning,” Noah Petro, deputy project scientist for LRO at NASA’s Goddard Space Flight Center in Greenbelt, Maryland, said in a statement. “The image of the Earth evokes the famous ‘Blue Marble’ image taken by astronaut Harrison Schmitt during Apollo 17, 43 years ago, which also showed Africa prominently in the picture.”

The shot is a sort of combination of the Blue Marble photo and an earlier “Earthrise” image, which was taken by the Apollo 8 crew — the first people ever to leave Earth orbit — as they entered orbit around the moon on Dec. 24, 1968.

“It was credited with awakening the modern version of the environmental movement,” former United States Vice President Al Gore said of the 1968 photo at the annual fall meeting of the American Geophysical Union in San Francisco on Dec. 16.