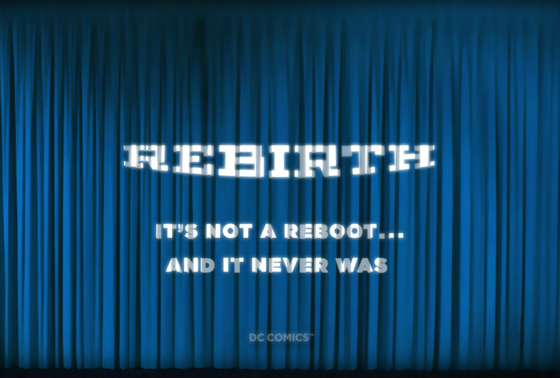 DC has revealed their “Rebirth” line dropping this year. It’s a bit interesting. The company is looking to return the “legacy” to their universe by acknowledging past events, returning Action and Detective to their original numbering, and introducing some twice-monthly titles.

“Rebirth” stands revealed. DC Comics has pulled the curtain back, revealing the shape and scope of their line of superhero comics after the status-quo redefining “Rebirth” launches in May. Following the release of the $2.99, 80-page “DC Universe: Rebirth” #1 on May 25, DC Comics will begin to roll out “Rebirth” specials” and new #1 issues for their ongoing series. Although as CBR exclusivelyrevealed, two series — “Detective Comics” and “Action Comics” — will return to their original numbering.

The line will include two types of books: those published twice monthly and those published on a monthly basis. Every DC Universe book, regardless of their publication schedule, will be priced at $2.99. The line will consist of 32 total ongoings, 17 twice-monthly and 15 monthly titles. DC will also publish 23 “Rebirth” one-shots ahead of launching the new ongoings.

“At DC we believe in superheroes, and what makes them great,” DC Entertainment Co-Publisher Dan DiDio said in a statement. “And, we also believe in the direct market and the core comics fan. ‘Rebirth’ is designed to bring back the best of DC’s past, embrace the stories we currently love and move the entire epic universe into the future. We are returning to the essence of the DCU. With ‘Rebirth’ we are putting the highest priority on the direct market and we will continue to create and cultivate new opportunities for retailers to thrive and prosper, grow readers, fans and customers.”

Creative team information on DC’s new lineup is set to be revealed next month at WonderCon in Los Angeles, on Saturday, March 26. The event will be live-streamed on DC’s YouTube channel, bringing the news to those unable to attend the event in person.