Archives
« Del Toro’s ‘THE STRAIN’ Trailer: Vampires On A Plane!
Nicolas Winding Refn announces ‘I WALK WITH THE DEAD’ as next flick » 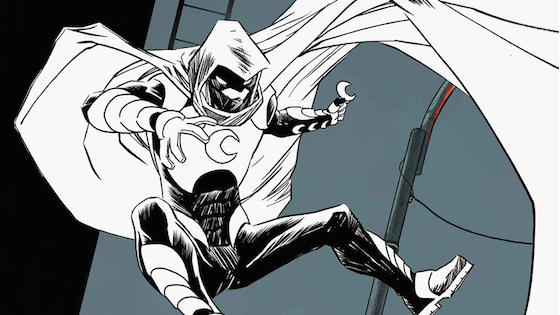 I spent a good amount of time (okay not forever, but for a guy with ADD it felt like typing it took eons) in this week’s comics column talking about how I was going to check out Moon Knight. ‘Cause Ellis/Shalvey. And now it turns out the duo that had me torqued on the title are leaving. However! It is none other than Brian Wood and Greg Smallwood taking over the reins to the Moon Steed. So, I’m conflicted.

Warren Ellis and Declan Shalvey have commented on Wednesday’s announcement that they’ll leave Marvel’s Moon Knight after August’s Issue 6, with the artist revealing he’s taking a break from monthly comics.

Part of the publisher’s All-New Marvel NOW! initiative, Moon Knight debuted solidly in March, landing in Diamond’s Top 20 and earning praise for both the characterization by Ellis and the art by Shalvey and colorist Jordie Bellaire (she’ll remain on the series).

“Issue 1 went to three printings, and 2 and 3 went to two printings, and so I consider that a job reasonably well done,” Ellis wrote in his email newsletter. “The job has been, simply, reactivating Moon Knight as a productive property for the Marvel IP library. And, in personal terms, producing six single stories that held together, because I thought it would be amusing to provide a book that could be entered at any point and still give the reader a complete experience. Which goes against the grain a bit, because the modern commercial-comics reader has been very much entrained to expect long arcs rather than singles. I’m sure there are plenty of complaints out there about the lack of character arcs or long stories. But the book is still getting bought and reordered. So I guess we found an audience after all.”

On his blog, Shalvey said the departure of Ellis left him with the choice of working with another writer or making way for a new creative team. “No matter who took over as the writer, if I stayed on the collaboration just wouldn’t be the same,” he wrote, “and there would be a change in the work as a result, which would probably be unfairly blamed on the writer. I felt it would be better to step aside with Warren, leaving on a high note, making our run ‘Moon Knight Season One’ and let a new team do their own thing right from the first issue of the new arc.” [Robot 6]