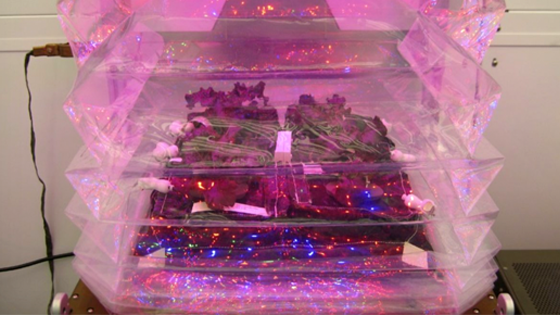 SPACE LETTUCE, mofuckahs. The time is now, now, now. NASA’s Greens In The Black Expanse of Oblivion project is almost ready to bare…veggies. In space, no one can hear your kids scream about getting veggies! Other dumb intro sentences!

Astronauts aboard the International Space Station will soon have a new means of growing food. After several delays, NASA will launch the Vegetable Production System(or VEGGIE) aboard SpaceX’s Dragon capsule on Monday. The plant growth chamber (which looks a bit like it belongs on Star Trek) will grow lettuce inside prototype flight pillows that will help the plants withstand zero gravity. NASA states red, blue, and green LEDs will help sustain the vegetables, and the plant chamber itself can grow to 11.5 inches wide and 14.5 inches deep, making it, according to NASA payload scientist Gioia Massa, “the largest plant growth chamber for space to date.”

The VEGGIE project was originally slated to launch late last year, but faced delays meant to ensure all safety precautions were taken. It’s now hoped that the chamber will eventually be used to grow a wider variety of vegetables, and even be used for recreational gardening. It may even be used for more ambitious projects, like providing food for the average person back on Earth. [The Verge]