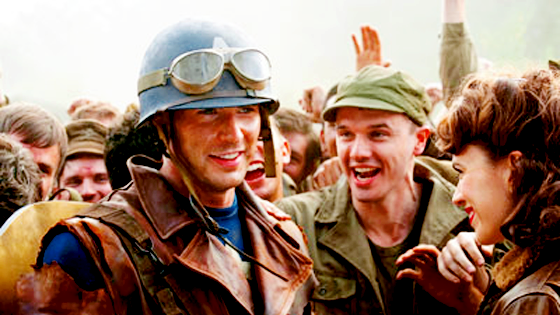 When Steve Rogers plunged his silly ass into the ocean (if you go by movie canon, agreed, okay, shut the fuck up), he didn’t just take the world’s only super soldier out of the game. He ripped a piece of glorious propaganda out of the hands of the United States to employ during the Cold War. So what is a government to do? Find another Cap! Generate a facsimile. Captain America 3 could follow more Brubaker goodness and explore what happens when the Captain America stand-in goes fucking apeshit.

We know that brothers Anthony and Joe Russo will return for the third installment, reportedly set for May 6, 2016, with screenwriters Christopher Markus and Stephen McFeely already on board. But what will the next adventure of Steve Rogers entail? Will it dive back into the Ed Brubaker-penned comic books that inspired The Winter Soldier‘s story?

Speaking with Den of Geek, Markus and McFeely opened up a little bit about their vision for the next chapter.

“You can probably predict some of the threads we would like to pick up again that we’ve laid out there,” McFeely said. “And we always go back to the comics and dive back in and look at anything we’ve missed in the last few years that might be relevant.”

“We’ve definitely set out on a more realistic road in the Cap movies, you know,” Markus added. “Even more grounded than in the other MCU movies. And so it kind of rules out Cap fighting the Dinosaur Man or something like that. There are some that aren’t gonna start and other ones that — I mean there’s a couple we’re playing with right now that we really want to take elements from. Which we’ll not reveal. … All I’m saying is psychotic 1950s Cap.”

That last part is very interesting. Are Markus and McFeely looking to introduce William Burnside to the Marvel Cinematic Universe — the same man who posed as Captain America in the 1950s while the Super-Soldier was on ice? Burnside factored into Brubaker’s run in interesting ways, so there’s certainly ways to fit him into the MCU’s interpretation of theCaptain America mythos. As with all things Marvel, we’ll just have to wait and see. [Spin-Off]