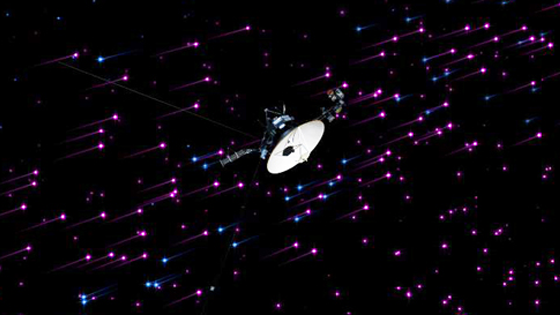 I have to enjoy small victories in life. Like when I watch people far, far, far more intelligent than me trip all over themselves. Take for instance: those Astronomical Wizards who keep trying to figure out if Voyager 1 has left our solar system.

A re-interpretation of Voyager 1 data is refuelling the debate over whether the spacecraft has truly left the cozy confines of our solar system. According to a new University of Maryland study, it exited the heliosphere last year. The confusion, say the researchers, stems from NASA’s failure to account for a particular magnetic phenomenon.

So is it in, or is it out? That’s the question that’s been plaguing scientists for well over a year now. Last year, the intrepid spacecraft entered into the so-called magnetic highway, a strong indication that it had finally reached the outer fringes of the solar system.

Voyager 1 has been steadily working its way out of the solar system, and it now appears to have entered into a completely new region of space. NASA… Read…

The region of space that’s it’s currently in — or thought to be in — has been dubbed theheliospheric depletion region. Voyager 1 crossed in and out of this boundary five times last year, revealing that the boundary separating the solar system from outer space is not uniform, but is instead rippled and turbulent.

NASA insists that it’s still within the heliosphere — but not everyone is convinced. A study published this week in the Astrophysical Journal suggests that the spacecraft actually left the solar system last year — on July 27, 2012 to be very precise.

NASA scientists have said for years that they’ll know Voyager has left the solar system when the local magnetic field changes. Beyond the heliosphere, magnetic fields emanate from the long arms of our galaxy, and not the sun; Voyager should be able to detect this.

[Marc] Swisdak and his colleagues, however, make the case that NASA failed to account for a phenomenon called magnetic reconnection. That’s when opposing magnetic field lines come together, snap and form new connections. Reconnection is believed to be responsible for the sun’s explosive solar flares and coronal ejections.

The study authors hypothesize that the magnetic fields of the sun and of interstellar space have joined together in areas they call “magnetic islands,” and that these islands make the border of the heliosphere very uneven. To add to the confusion, these combined magnetic fields run in the same direction.

In other words, NASA scientists have been waiting for the wrong signal!

The reason for the specific date, July 27, 2012, is that’s the day Voyager recorded a permanent drop in heliosphere-produced particles and an increase in galactic cosmic rays from outside the solar system.