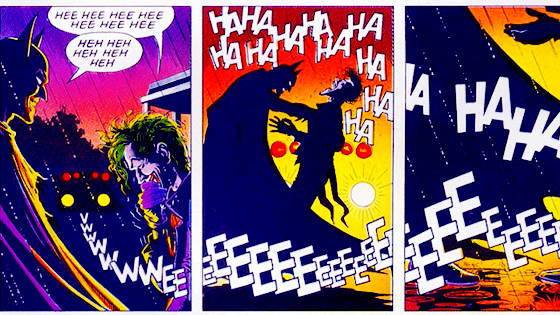 I’ve always sort of interpreted the ending to The Killing Joke as The Bats finally killing the Joker. So I’m going to double-down on my belief, supported by the Wizard Mind of the Intergalactic Shaman of Comics.

Grant Morrison delivered a bit of a mindfuck on Wednesday. Strangely, he didn’t do it in one of his own comics, but by revealing the secret end of Alan Moore’s seminal Batman graphic novelThe Killing Joke — namely, that Batman actually murders the Joker at the end.

Morrison was talking to Kevin Smith on his podcast when he revealed his take on the story’s final panels. Here’s the money quote:

“No one gets the end, because Batman kills The Joker. […] That’s why it’s called The Killing Joke. The Joker tells the ‘Killing Joke’ at the end, Batman reaches out and breaks his neck, and that’s why the laughter stops and the light goes out, ’cause that was the last chance at crossing that bridge. And Alan Moore wrote the ultimate Batman/Joker story [because] he finished it.”