Archives
« RICHARD MATHESON passes away at age 87. He Is Legend.
GREG PAK and Aaron Kuder taking over ‘ACTION COMICS’ this November. » 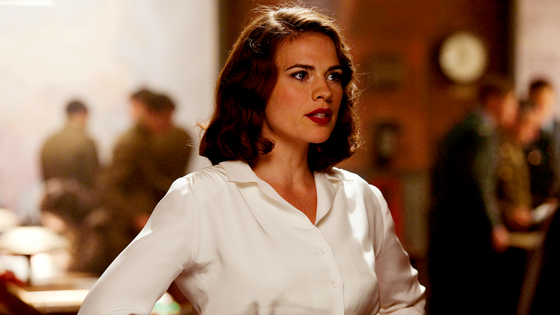 I had myself a crush on Peggy Carter in Captain Unfrozen Guy: Tony Stark’s Second Fiddle. Big time. So when dummy Rogers plunged his bi-plane-thing-whatever into the ice, I figured I would never see her again. That isn’t the case! Not at all. In fact, I may be seeing her even sooner than Cap 2: Bucky Lives! When, you ask? Perchance the Iron Man 3 Blu-Ray.

After playing coy for a few months, even denying the possibility, it was eventually confirmed that Hayley Atwell would return for Captain America: The Winder Soldier, potentially in flashbacks and as an aged character in the modern setting. To help bridge the gap and perhaps explain the origins behind Peggy’ niece and current S.H.I.E.L.D. Agent Sharon Carter (Emily VanCamp), Marvel Studios is releasing a short film starring Agent Carter.
We don’t know if that means it’s focusing on Peggy or both Peggy and Sharon, but Atwell, speaking to The Age in April, confirmed at the time that she was not only returning for The Winter Soldier but had shot a little something extra, a short film that would debut Comic-Con:

“There’s been an online campaign for Peggy to be featured. People really liked her. So Marvel have made sure that as part of Comic-Con there will be a little kind of snapshot as to what Peggy’s actually really capable of, which was finished here and which was great fun. Hopefully, it will lead to other things.”

“Fans of the first film really wanted to find out what happened to Peggy afterwards, so Marvel are also making a short film, which is basically ‘What Peggy Did Next’, which will be shown at Comic-Con [the annual international pop culture convention held in San Diego] and be on the DVD extras of the second film.

So as well as doing a bit in the new film, I’ve got a whole new spin-off short film. It has been great to be back in training with the stunt coordinators, kicking some butt again.”