Archives
« First official ‘CAPTAIN AMERICA: THE WINTER SOLDIER’ photo. Carry that SHIELD like a weight.
Monday Morning Commute: It Is The Year 2007. It Is The Future. »

DC’s NEXT CROSSOVER pits JUSTICE LEAGUE teams against one another. Snore? 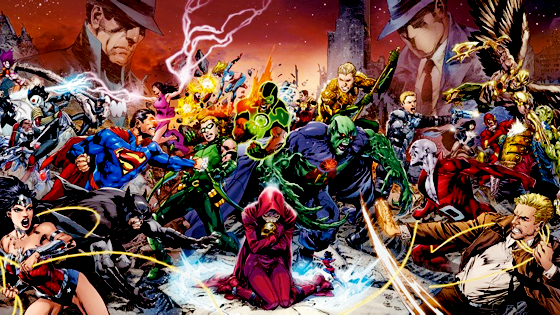 Jesus titty-fucking a kangaroo, this is dumb. We’re not even a year removed from Avengers fighting X-Men fighting Tediousness, and we have DC doing their best imitation of the Event. Oh sure I’m sure there will be marginal differences, but come on. Come onnn. The only thing more played out than the ennui-inducing concept of a super team is having those teams that populate a company’s universe fighting one another.

Three flavors of Justice League — plain, Dark, and of America — will battle it out in Trinity War, a six-issue crossover event spanning all three Justice League titles in July and August, USA Today reports.DC is promoting the event, written by Geoff Johns and Jeff Lemire and with art by Ivan Reis, Doug Mahnke and Mikel Janin, as the first meetings of lots of the heroes involved. The story revolves around the so-called “Trinity of Sin”: Phantom Stranger, the Question, and the mysterious Pandora, the hooded woman who was present in the universe-changing Flashpoint and every New 52 #1 issue when the reboot started up in September 2011.

Pandora’s set to get her own series the month before the crossover begins and the Phantom Stranger has been the star of his own comic since September. The New 52’s version of The Question, however, remains an what Lemire calls a “bit of a wild card.”Though heavy-hitters such as Superman and Batman will be prominently featured, Johns and Lemire promise that other, less-familiar characters including Shazam, the Atom, Element Woman and Frankenstein will get considerable page time, too.As for what brings all these Justice Leagues together, rest assured it’s something that endangers the entire DC Universe.”It’s not going to end wrapped up in a bow,” Johns said. “Something really, really major happens that kicks off some pretty crazy stuff at the end of August.”The event kicks off with July’s Justice League #22.