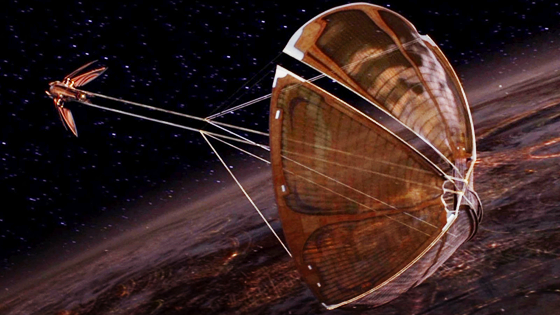 All I know about solar sails comes from Arthur C. Clarke, but most importantly – from Count Dookie or whatever from Attack on My Childhood: Episode 99. Motherfucker all flies away after hacking off Emo Hitler’s arm, utilizing some sort of sailing device. Uh. Anyways, we have them as well, I guess. And a massive one is setting out in 2014, probably to hunt down Count Dookie and slay the living shit out of him.

In the vacuum of space, solar sails substitute radiation from the Sun for the wind used by earthbound sails. In 2014, NASA will launch Sunjammer, the largest solar sail yet: each side measures 124 feet, made of material just 5 microns thick. While Sunjammer has been in the works for some time — and far smaller solar sails have gone up in years past — Space.com recently profiled the project, which ultimately could let ships move through space without needing expendable fuel. The actual force Sunjammer receives from solar radiation is minimal by Earth standards — the maximum thrust is .01 newtons, which project manager Nathan Barnes says is roughly equivalent to the weight of a sugar packet — but in space, that could let it perform everything from solar observation to near-Earth asteroid visits.

Sunjammer could open up huge opportunities for future exploration, and its roots are based firmly in science fiction. The name itself comes from an Arthur C. Clarke story about yacht racing in space, and Barnes says Clarke’s estate granted them permission to use it for the mission. Sunjammer will also carry the cremated remains of Star Trekcreator Gene Roddenberry and his wife Majel Barrett Roddenberry, along with others who have paid to have their ashes sent to space.