A storm on SATURN so frakin’ huge it wrapped around the planet. Blood + Thunder. 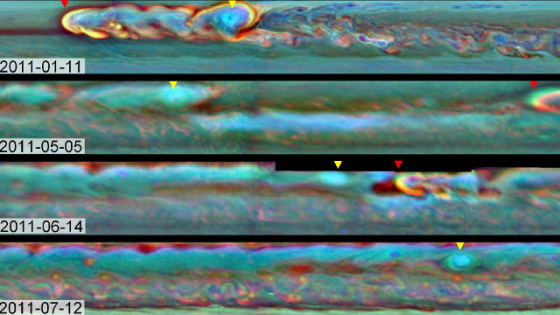 How is this for a storm. The wunder-object Cassini has picked up a thunder-and-lightning maelstrom on Saturn that is so goddamn enormous, it wraps around the entire planet. That is some straight not fucking around space right there.

Cassini has captured something NASA scientists have never seen before: A massive thunder-and-lightning storm that wrapped itself around Saturn creating a seamless ring around the planet. But when the lead portion of the storm finally caught up with itself, it began to lose its steam.

Located at 33 degrees in the northern latitude, NASA first first detected the unprecedented storm in December 2010 using Cassini’s radio and plasma wave subsystem and imaging cameras. As the astronomers chronicled its evolution, they started to notice that the turbulent head started to make its way west. This kindled a clockwise-spinning vortex that slowed down. But after a few months, the storm made its way completely around the circumference of the planet, a distance of 190,000 miles (300,000 km).

To put that into perspective, that’s roughly the length of 24 Earths placed side-by-side.