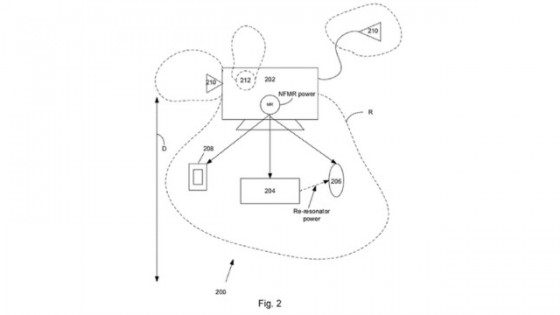 Wires are only good for tying up your loved ones, and slowly spanking them. In my future, there is no place for those easily-tangled bastards outside of eroticism. Apple feels me! Apple feels me! A new patent of theirs outlines the future we’ve been waiting for, a future replete with wireless charging.

In a patent application published a few days ago, “Wireless Power Utilization in a Local Computing Environment,” Apple is filing for some tech that looks like wireless charging heaven. Using near-field magnetic resonance, Apple aspires (in theory) to create a wireless charging dome that reaches out up to a yard from the source, powering anything nearby with NFMR resonator circuits in them. Mice, keyboards, phones, remotes, whathaveyou. It’s a dream come true.

Or rather it could be a dream come true if this is actually coming down the development pipe and works according to plan. Sure, jacking up NFMR so that the “near-field” is several feet could charge distant devices, but it could also mess with things like credit cards, and who knows what else. On top of that, there’s also the chance this patent is more of a defensive move, and that this kind of charging is still a way off, but the patent was filed “just in case.” Either way, it’s nice to dream, right? But shorter the time we’re reduced to dreaming, the better. [WIRED]