NASA discovers that MERCURY has water at its poles. G’damn space miracle. 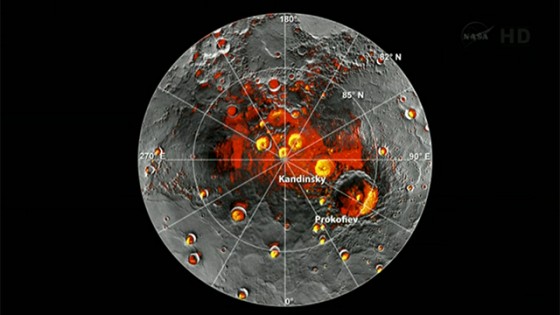 How is this for unexpected. The planet closest to the Sun sports frozen water and its poles. The barren ball of Space Hell may contain the building blocks of life. Or something. God. Damn. Fascinating. Lord, I love it when  scientist wizards find something so completely counter-intuitive to common beliefs. The mysteries of the Universe give our arrogance the finger, lurking behind the pale of discovery.

NASA has confirmed a surprising, counterintuitive discovery. The burning hell known Mercury, the closest planet to the Sun, has water. Frozen water. Three news research papers based on data obtained by the Messenger spacecraft show undeniable evidence—”clear results” as the project’s director calls them.

It’s not just a little bit of water. It’s huge amounts. Enough to cover the capital of the United States.

The results—obtained with three different instruments—are being presented in a press conference now at NASA HQ in Washington D.C. These findings fully confirm previous hypothesis and observations, but they are still surprising. Mercury is the closest planet to the Sun and has no atmosphere. That means that it gets extremely hot and extremely cold: Mercury’s surface temperature goes from 50 K (-369.67F/-223.15C) to 700 K (800.33F/426.85C).

But thanks to its angle in relation to our home star, there are areas that are always in the shadow. That’s where the ice sleeps, protected from the sun’s radiation by this shadow and dark organic rich deposits. These organic deposits insulate the water from the sun.

Even more exciting: NASA scientists think that his “complex mix of organic materials” is similar to the material that eventually made life to rise in Earth. Like in the case of Earth, this material was probably brought by comets colliding with Mercury.