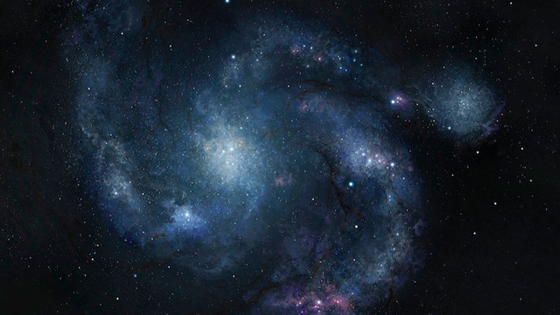 I’m particularly fond of the stories that contain remarks like “shouldn’t exist” or “defies expectations” or “confuses the shit out of people.” It makes me warm knowing that as much progress we make, we are generally still blind mice milling about in a world of confusion. The Universe is still full of wonder.

This galaxy is so large, so fully-formed, astronomers say it shouldn’t exist at all. It’s called a “grand-design” spiral galaxy, and unlike most galaxies of its kind, this one is old. Like, really, really old. According to a new study conducted by researchers using NASA’s Hubble Telescope, it dates back roughly 10.7-billion years — and that makes it the most ancient spiral galaxy we’ve ever discovered.

“The vast majority of old galaxies look like train wrecks,” said UCLA astrophysicist Alice Shapley in a press release. “Our first thought was, why is this one so different, and so beautiful?”

Shapley is co-author of the paper describing the discovery, which is published in the latest issue of Nature. She and her colleagues had been using Hubble to investigate some of our Universe’s most distant cosmic entities, but the discovery of BX442 — which is what they’ve dubbed the newfound galaxy — came as a huge surprise.

“The fact that this galaxy exists is astounding,” said University of Toronto’s David Law, lead author of the study. “Current wisdom holds that such ‘grand-design’ spiral galaxies simply didn’t exist at such an early time in the history of the universe.”

The hallmark of a grand design galaxy is its well-formed spiral arms, but getting into this conformation takes time. When astronomers look at most galaxies as they appeared billions and billions of years ago, they look clumpy and irregular. A 10.7-billion-year-old entity, BX442 came into existence a mere 3-billion years after the Big Bang. That’s not a lot of time on a cosmic time scale, and yet BX442 looks surprisingly put together. So much so, in fact, that astronomers didn’t believe it at first, chalking their unusual observation up to the accidental alignment of two separate galaxies. But further investigations, conducted at the W.M. Keck Observatory in Hawaii, revealed BX442 to be the real thing.

So how does a galaxy that shouldn’t exist come to be? The researchers think the answer may have something to do with a companion dwarf galaxy looming near BX442 (in the image up top, it’s the separate circular cluster in the upper right). Simulations conducted by University of Arizona researcher Charlotte Christenson indicate that gravitation interactions between the two, which she says appear to be in the process of colliding, may have helped BX442 take shape.