Archives
« University lab technician drunkenly parties with monkeys, gets arrested. Damn the man.
‘THE MASTER’ GETS NEW CLIP: I Lost My Ship »

Mars rover fires its laser, totally lights up a rock. It’s for science, people. And fun. 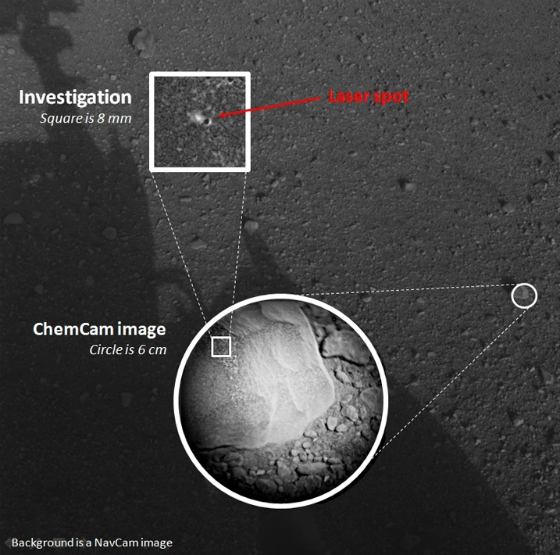 Ain’t nothing wrong with mussing around a little bit on Mars. Curiosity has deployed its laser, teaching a dumb Martian rock about the strength of human prowess. Or at least how much we like blasting things with phallic lasers.

NASA’s Curiosity rover, which touched down on the surface of Mars two weeks ago, has made the first use of its Chemistry and Camera (ChemCam) instrument, firing a laser at a rock and analyzing the results. According to a statement from NASA, the test — billed as “target practice” for future missions — involved hitting the rock with 30 brief laser pulses, each delivering more than a million watts of power. The barrage transformed the target area into a stream of molten plasma[.]

Changes in the composition of the plasma between each pulse could indicate that the laser managed to penetrate the surface of the rock, revealing details of the material at its core. This sort of chemical analysis will prove useful on Curiosity’s upcoming mission to a spot known as Glenelg, which will allow scientists to study three different types of terrain, as well on the rover’s four-week trek to the base of Mount Sharp, a more complex and dangerous journey.