SATURN’S MOON IAPETUS got itself some pretty gnarly avalanches. 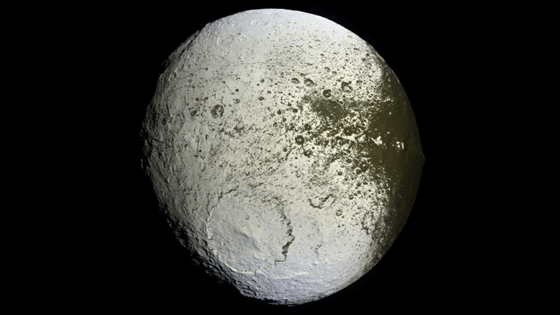 You think you’re surfing the gnarly waves of crystallized water stuff here on Erf, brah? Think again. Saturn’s moon Iapetus is where all the legitimate skier people are going. We’re talking avalanches like a mofuckah.’

Iapetus, already one of the strangest moons in our solar system, just got a little weirder. Images from the Cassini space mission reveal that the mysterious moon is home to massive ice avalanches second in size only to landslides seen on Mars. Studying them, say researchers, could help us better understand geological disasters here on Earth.

Our solar system is home to some pretty peculiar moons, but few are as curious as Iapetus. As we wrote back in March, Iapetus is like a riddle, wrapped in a mystery, swathed in an unaccountably two-toned exterior:

[Iapetus] is two completely different colors; the moon’s trailing hemisphere is as bright and reflective as snow, but its leading hemisphere is as dark as freshly poured asphalt – a characteristic that has led many astronomers to refer to it as the “painted” or “yin-yang” moon. How the yin-yang moon acquired this bizarre coloration is a mystery; nobody is even sure what the dark material is made of. Equally puzzling, however, is the prominent ridge that runs almost perfectly along Iapetus’ equator (a feature that has earned it yet another nickname: “the walnut moon”). Like the moon’s two-toned coloration, nobody is sure how the ridge…came to be.

Now, researchers reporting in the latest issue of Nature Geosciences have added another puzzle to the pile: enormous freaking ice avalanches.

“We see landslides everywhere in the solar system,” explained first author Kelsi Singer in a statement, “but Saturn’s icy moon Iapetus has more giant landslides than any body other than Mars.”

Singer had been using images captured by NASA’s Cassini spacecraft to look for fractures in the moon’s icy surface that fellow researcher and co-author William McKinnon thought might help explain the planet’s equatorial ridge. She found almost no evidence of fractures, but she did identify 30 enormous ice avalanches. Thirteen of them had careened down the slopes of the moon’s equatorial mountain range, the remaining 17 had run down the walls of impact craters.

McKinnon, whose research revolves around the icy bodies of the outer solar system, says these topographical features are a large part of what makes these ice avalanches possible:

“Not only is the moon out-of-round, but the giant impact basins are very deep, and there’s this great mountain ridge that’s 20 kilometers (12 miles) high, far higher than Mount Everest.

“So there’s a lot of topography and it’s just sitting around, and then, from time to time, it gives way.”

Ice surfing is up, dork face!